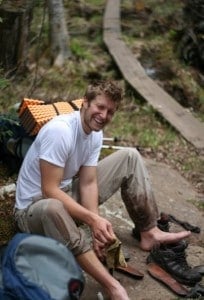 The author after missteps on Isle Royale.

The plan itself arose from an epic case of senioritis a few months prior, but after a last week full of too many goodbyes and too-elaborate celebrations on boats, golf courses, buses and bicycles, the silence and solitude of Isle Royale couldn’t have come at a better time. The fervor died, the apartment was emptied, and we could feel our soul’s shifter shaking as we changed gears from “College Grad!!!” to “Wow. What’s next?” I at least would be roadtripping across the country for a year in Portland, Oregon with the Jesuit Volunteer Corps, but Joe – well, he knew he’d be having a graduation party with his family the next weekend. There would be volleyball.

So we hiked. And we listened. And we thought. And we hiked. And we built campfires and watched them. One day full of rain, we were cloistered in our small tent for 4 hours – one of those backpacking tents that barely fits two people, sleeping foot-to-head, head-to-foot. Then we hiked. And sometimes we talked. When we did, it was like someone tossed a pebble into a calm pond. It was exciting. It was significant. Conversation, no matter how much or how little, seemed worth more. We could consider the ripples for hours after. About three hours into our fifth day of hiking, we came around a bend and stood face to face with our biggest hope and biggest fear of the trip: an 800-lb moose. Hope because Isle Royale is well-known for its perfectly balanced predator-to-prey ratio of moose and wolf, and we were hoping to see at least one moose to confirm the research; Fear because, well, 800 pounds. Fear because it was calving season- if we somehow threaded the needle between ‘threatened’ calf and ‘angry’ mother, rangers instructed us to hide behind a tree large enough to withstand the blow of a charging train. Fear because we couldn’t see the calf.

The moose stared us down just long enough for Joe to grab his digital camera and snap a few photos before it turned around and rumbled into the forest, crushing everything in its path. The ground literally shook beneath us. We still laugh about it.

The moose wasn’t the only thing to break our long silences.

Neither was the Pileated Woodpecker, an eagle-sized bird as loud as a machine gun that made us both jump and whose visit helped me check an epic box on my lifetime birding checklist:

From time to time, something even bigger broke our silences, the equally rare Big Questions:

It was an explosion in a quiet sky. And a little bit later…

“You know, I think this might sound crazy, but…” The author at a campsite on Isle Royale.

We were at a crossroads bigger than the trails on Isle Royale, asking questions as big as our theology faculty could’ve hoped two of their graduates would ask. We were connecting all the dots and taking risks with crazy ideas, trying to ride them straight to the heart of the world, clear to the heart of God, and to the heart of our unfolding purpose on earth. We were making, as Thomas Merton quipped, “raids on the unspeakable,” dreaming hugely and with reckless abandon:

Against the backdrop of silence and star reflections on still-surfaced lakes, loon calls and all-night moon-white birch forests, anything was possible for these two friends.

Seven years after Isle Royale 2009, I’m six years joyful into Jesuit training and Joe’s found a wonderful companion in Owen and an exciting adventure in medicine. But we’re still daydreaming the next big trip, whether on the Pacific Crest or the Appalachian Trail – anywhere big enough, long enough, and quiet enough to wrestle all of life’s big questions again.

In the meantime, I collect maps and tips; in the meantime, I carve some of that same silence out of every day I can, asking bigger, deeper and newer questions of the God who meets me there, wondering and dreaming, too.

All photos taken by the author’s traveling partner, Joe Hancox.