I root for one team that has set an ignominious record in American sports history and another that hasn’t won a championship in 54 years. Cheering on a sports team that lets you down can seem like a series of sucker punches that make you wonder why you ever bothered having hope – you know, kind of like a Darren Aronofsky movie… 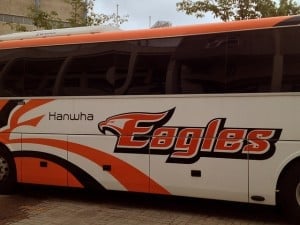 Well it’s a good thing a Korean baseball team has solved many a sports fan’s problems! Check out this article from the BBC on the lengths that the last-place Hanwha Eagles have gone to in order to extend the ballgame to fans who can’t suffer through a ballgame with their team and fellow fans.

Hanwha Eagles supporters not able to get to the stadium can control the robot [fans] over the internet. The bots can cheer, chant and perform a Mexican wave – but presumably not invade the pitch.

I had to think to myself: isn’t it better for my face to appear on a robot at a stadium than for me to be there in person and suffer through disappointment? It sounds like a good idea…

Ah, thanks kind robot! You’re right, it is dangerous to outsource fan experience onto a contraption of wires and metal. There’s some great benefits to new technology expanding the people’s experience of sport. I was especially intrigued by the article’s mention of Japan’s attempt to lure the 2022 World Cup by using holograms to simulcast games in multiple stadia, thus allowing hundreds of thousands of people to view a “live” game at a stadium.

But “live” implies “alive,” whether they be players or fans. There’s nothing like the communal adrenaline rush of a sporting event (or concert, for that matter), and intermediaries like robots, holograms, or even free Wi-Fi can dilute the fan experience and sap us from full, active participation through the senses of a live sporting event. And it’s for that experience that I’ll deal with a loss or 10,000.