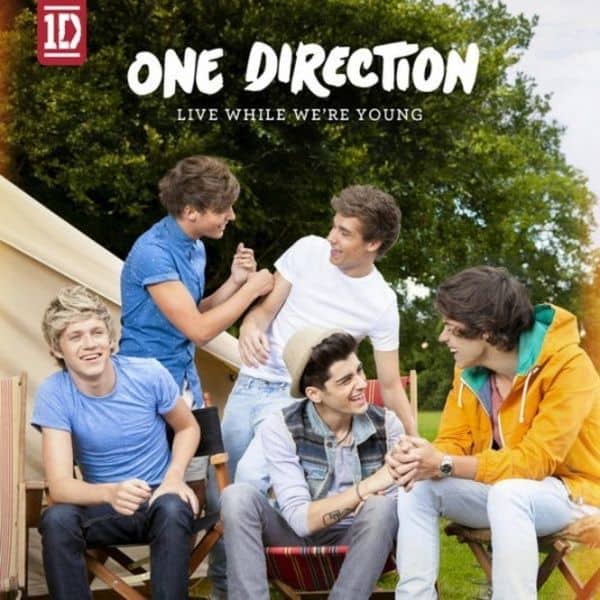 In April 2012, Harry Styles, One Direction’s floppy-haired frontman, was googled 15 million times.1 He beat out ‘Secret Service’ which, fresh off its sex scandal in Cartagena, Colombia, garnered more than three million searches and Mitt Romney who–closing in on the Republican nomination for president–was googled about 2.5 million times.

Mr. Styles had been photographed snogging (or kissing to us in the USA) Emma Ostilly, a model of Victoria’s Secret and Abercrombie and Fitch fame. It later came to light that Taylor Swift–then secretly dating Harry–was heartbroken by his cheating ways.  Ms. Swift took her broken heart all the way to the bank, selling more than two million copies of the her album ‘Red’ (which I reviewed earlier this month). No matter. Harry and his mates will also turn indiscretions to dollars as they share with us the highlights of life as celebrity heartbreakers on ‘Take Me Home,’ One Direction’s second album, which dropped last Monday.

In the band’s first single, Harry et al. reassured girls who don’t know they’re beautiful.  Now, Harry tells us he’s more interested in the girl in the ‘tight dress with the top cut low’ who assuredly knows she is beautiful. ‘Take Me Home’ concerns itself with the male penchant for unsubtle if not unsuccessful pleas to girls to sneak out and hook up.  “Don’t over-think, just let it go” Zayn Malik and his pompadour counsel his putative lover (likely with more success than that line’s earned gotten me).

But men of dubious virtue still have their moments of tenderness. ‘Little Things‘ (perhaps the strongest track on the album and certainly the most-swoon inducing) gently praises the details that make a relationship special, e.g. one’s preference for an evening tea or “the dimples in your back at the bottom of your spine.” They may be playboys, but at least they remember their lovers.

Still, this high life is not without hardships. Jealousy leads to both cardiac distress in ‘Heart Attack’ and to the worst lyric in the album in ‘I Would,’ where Harry sings of his crush’s boyfriend, “He drives to school every morning/ While I walk alone in the rain/ He’d kill me without any warning/ If he took a look in my brain,” making us wish he never owned a rhyming dictionary. In ‘Rock Me’ the band regrets relationships left behind in the summer of ’09 (can these boys really be forty years younger than Bryan Adams?). They even parse the particular awkwardness of being friends with benefits (‘Change My Mind’).

So why does Harry pique our interest more than Mitt? Because we’d rather be Harry. ‘Take Me Home’ is one of those great albums (like fun.’s ‘Some Nights’, Ke$ha’s ‘Animal,’ or the Beatles’s ‘Rubber Soul’) that invites us to vicariously live a life more exciting. Really, who doesn’t want to be told ‘Don’t over-think, just let it go?’