Race and ethnicity slapped me in the face during the Jesuit Volunteer Corps.

I arrived in Washington, DC’s Dulles Airport in August 2009 ready for JVC. New city, new people, new adventure. I felt a little nervous. Being from the Pacific Northwest, I immediately went to Starbucks in the airport. Time for a Venti Iced Coffee. No classic syrup. One inch of heavy cream. I ordered my drink, paid, and stood by the counter looking around as the baristas made my drink.

The stark racial contrast should have been obvious. All the Starbucks baristas were African American. All the customers were white collar professionals. I got my coffee and watched the men and women walk by the Starbucks. Custodians – exclusively African American. The travelers – almost all white men and women, many wearing suits and ties. What does this division suggest?

That was the first major slap in the face that year, and yet somehow, I missed the message. I just assumed I was seeing what I studied in my sociology courses – the effects of economic inequality. It couldn’t be racial inequality, I posited, for racism mostly ended with Martin Luther King Jr.’s struggle for racial justice. If racism did still exist, it wasn’t in the North where I was from. All of my friends were good-hearted, caring people who wanted equal rights for all people. I’m not racist, I thought; I believe in equal rights for all people.

Moreover, I am a racial minority myself. I was adopted from Nepal into a middle-class, American, mostly white family. My father is also adopted from Nepal, but the rest of our family is white. I worked hard, got a generous scholarship to go to college, and became successful like my other college classmates. I was a minority and wasn’t impacted by racism.

During my experience in JVC, I worked for the legal clinic at Bread for the City, a social service organization in DC. I should have noticed on the first day of work how all the clients were African American or Latino. During my year at Bread, I can confidently say that I talked with three white people coming in for legal assistance. Three out of literally hundreds.

Slowly, I began to see a city organized geographically and economically around color lines. My clients, many of whom had been displaced through gentrification, lived in neighborhoods that were poorer. The farther west I walked in the city, the whiter and wealthier it became. 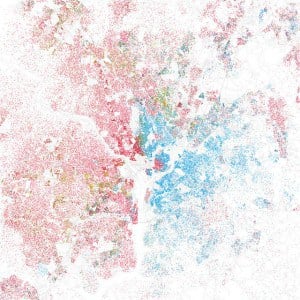 Moreover, I saw my own prejudices emerge. I had failed to see the ways that I make judgments based on race and ethnicity. I formed preconceived notions of my clients, filtered through the experience of my own “hard work leads to success” narrative. Race wasn’t a category of the past – it was a category inside of myself – stripping my own clients of the dignity Bread for the City promised to provide them.

It’s been five years since I flew into Dulles Airport, and I am still haunted by that experience. And so apparently is our country. We have an African American president, a sign of progress certainly, but we also have police brutality cases resulting in the death of young black men like Michael Brown, and more recently, Walter Scott. We are emotionally charged about the issue. With these cases in our mind, it’s no surprise that many Americans question the fairness of the criminal justice system.

The racism of Ferguson may seem distant for some, but not for people who must encounter racism in their everyday lives. We’re probably horrified when we learn of cases of racism, and, like TJP contributor Dan Dixon SJ, are left with questions when we’re confronted by racism in documentaries or theatrical presentations. How do we address a problem so large, when, we ourselves don’t seem to harbor racist views or know racist people?

Attitudes about these issues are shaped by the experiences, culture, and relationships that have brought us to today. They are also shaped by narratives we learn. I learned the narrative that all people are equal today, that racism is over, and that we can all freely become the person we want to be. JVC showed me that it wasn’t fully true. I resisted it because it was painful: the racial divide in the airport was so painfully obvious that I didn’t want to believe it was true.

I’d like to say that all my stereotypes and prejudices ended with JVC. Not the case, unfortunately. It’s still painful to see places of privilege or suffering in my life and in the lives of others. The changes needed are massive – changes in housing segregation and school systems, police tactics, and cultural attitudes about race, just to name a few. How can I even put a dent in such a pervasive problem? Perhaps by asking hard-hitting questions when I make an unsaid assumption:

Where is this prejudice coming from? What in my life caused me to feel this unspoken prejudice? How do I respond out of a place of love and generosity, not out of fear?

The answers are humbling. Most of the time, I’m not the good guy in the story. I’m that guy I believed didn’t exist in the United States anymore. Owning that is scary and embarrassing.

Asking these questions has made me ruined for life, and a new narrative has emerged. Not the American Dream narrative that promises unlimited self-remaking, because I saw people struggling just to get by. A new narrative, one that admits how my own beliefs contribute to the racism my clients faced. It’s not a bleak narrative, but it is a challenging one – one of readjusting my own thoughts, words, and actions. It’s a continuing narrative of confronting my own prejudices.