Miles to Go: On Street Harassment 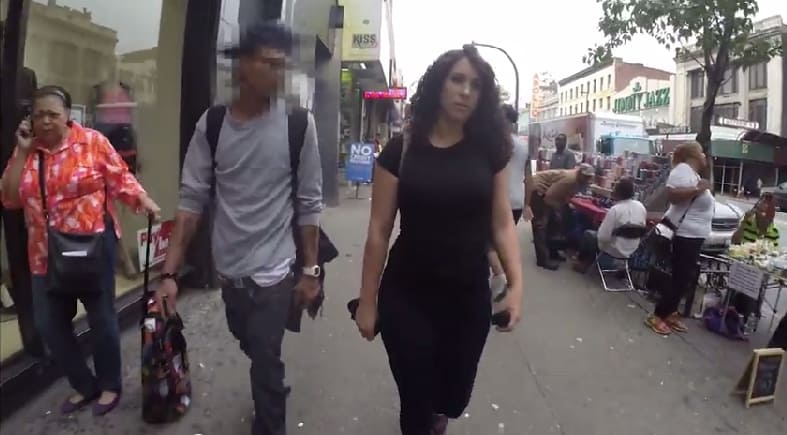 A few days ago a female co-worker dressed up as Rosie Riveter for Halloween. On the lapel of her coat, I noticed a button that said: “I Heart Feminist Men.” I felt a bit unsettled by the button because I felt as though it was making a negative attack on the word “man.”  I thought: “Why does the word ‘man’ need an additional qualifier? Are not the men of the 21st century making strides towards reconstructing our image?”

It wasn’t 30 seconds before thoughts of the NFL domestic violence debacle, university rape cases, sex trafficking and other egregious forms of abuse of male privilege snapped my temporary insanity. In retrospect, it was a mental brain lapse that was 30 seconds too long. But immediately after the conversation my mental lapse seemed all the more neglectful when I, like 29 million other people, saw the following PSA from ihollaback.org:

In the video, Shoshana Roberts walks for 10 hours and several miles through the streets of NYC. The vignette highlights the harassing comments and behaviors that women receive while walking down the street. Although the video has received some criticism for racial profiling, the message still stands: no matter how subtle or seemingly innocuous the comment, men still have a penchant for making women feel hyper-conscious of their appearance, their gender, and role in society – not to mention simply unsafe and unwelcome. While the video obviously garnered millions of allies, Roberts continued to receive harassing emails and even death threats for simply highlighting an everyday experience for millions of American women. A second video from The Daily Show further illustrates the point (Warning: some the of the language, although bleeped, is still graphic):

These twos videos only reinforced my friend’s (“Rosie the Riveter”) point: “Are we there yet?” The “there” is not in just simply in reference to a political construct of social equality, but towards achieving a reality where women don’t feel as though they have to “put on their bitch face,” walk to the other side of the street, wear less provocative clothes, avoid conversations, or shrink into themselves. How do we – men, women, all of us – construct a space where all of us can be ourselves – accepted, included, and appreciated, to see others as God sees us?  This video not only highlights the millions of the miles we all have to go before both we get there, but it also gives us the self-awareness of how we can get there.