A Re-Release of Biblical Proportions When Harold Ramis died earlier this year, a few of us Jesuit Scholastics got together to honor him be rewatching Ghostbusters.  We laughed, we cried, it was the emotional roller coaster of the year.  Now, this Labor Day weekend, in celebration of its 30th anniversary, Ghostbusters is being re-released in the theaters for one week only:

So, why do we re-watch movies or TV series or re-read our favorite books?  We know what is going to happen. We know the President’s speech in Independence Day is not going to change yet there I am watching it with a gleeful joy and reciting it myself.

For me, it is like visiting an old friend.  I know the stories that are going to be told, I know that jokes that will make me laugh.  There is a comfort in being with them.  Sometimes re-watching a movie can invoke memories. Ghostbusters was taped from TV on a VHS tape with “Can’t buy me love” and “The Breakfast Club”.  When re-watching it on netflix earlier this year, that is the memory that came back to me, I could imagine myself very clearly in the living room of our old house, and the feel of the couch.  Forwarding through two other movies to get to the one I wanted to watch.  It is more than a movie, it is a way of bringing back a memory or revisiting my life in childhood, college years, and today. 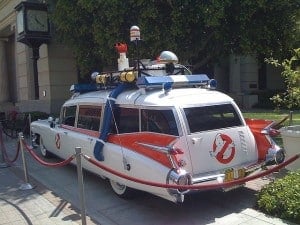 One surprise for me in the Jesuits has been discovering a similar emphasis in Ignatian Spirituality with the idea of repetition.  I realized that each time I prayed with a particular passage, oh lets say the road to Emmaus, l would discover something new.  The passage doesn’t change, but how I pray with it does.  Howard Gray SJ says the goal with repetition is to “personalize prayer”.  There are many passages, like movies, that have become deeply personal. I can revisit them over and over again with a sense of familiarity and an opportunity to experience them in a new way.

I’ll go see “Ghostbusters” on the big screen this Labor Day weekend even though I already know the appropriate response to someone if they ask if you are a god.  I’ll revisit it with new friends and make memories that I’ll recall in 2044 on the 60th anniversary, while on the ship to Mars as we prepare to celebrate the founding of Faber College on the new colony.