Organizing Activism: The Clash of the Faith That Does Justice 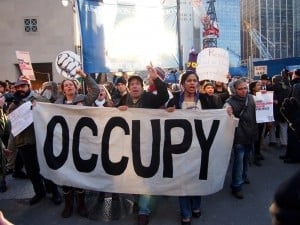 A couple weeks ago, I sat with a group of friends chatting about the community organizing that one of them works in. He asked me, as a fairly socially-minded person, if I had ever done training in community organizing. I mentioned a couple projects, including working with Amnesty International. He looked a tad disappointed, an understanding in his eyes that said, “Amnesty most definitely isn’t community organizing.” We had a good one-on-one chat, discussing the differences and why he tended toward organizing over activism.

The conversation came up because I have been researching the history of Jesuit involvement in labor organizing in St. Louis. Turns out, we used to do quite a bit, much of which I wish we still did. I came across the topic in my history of capitalism course, where I learned how Catholic immigrants in St. Louis appropriated different economic models to form their own communities in the late 19th and early 20th centuries. In that time period, a few Jesuits and their works came to the fore – Fr. Joseph Husslein and St. Elizabeth’s Parish particularly stand out.

Fr. Husslein wrote prolifically, publishing dozens of articles and books on economic justice. Titles range from Bible and Labor to The Labor Spy at Work and Socialist Press Propaganda in the United States. Fr. Husslein was an activist whose work was expressed through his position as an academic, demanding the creation of a just social order almost entirely based on Rerum Novarum and Quadragesimo Anno, both major documents on Catholic Social Doctrine. Quadragesimo  introduced language of social order, how we live justly with our neighbors. Fr. Husslein placed that goal of socially just living at the center of his efforts. He worked for change even without being directly connected to the community that change served. Though not directly involved in labor organizing, Fr. Husslein lived with several Jesuits who shared their experiences.

Much more “boots on the ground,” St. Elizabeth’s became a major black Catholic parish of St. Louis. The church focused on the needs of the surrounding black community. They addressed educational shortcomings, unemployment, civil rights and access to healthcare. In the 1930s, the parish established a credit union to provide access to capital that remained inaccessible due to poverty and racism. During World War II, St. Elizabeth’s built a chicken cooperative, selling the poultry for half the market price.

In a sense, each of these reflects what we respectively call activism (Fr. Husslein) and community organizing (St. Elizabeth’s). Activism may approach a community with an ideal or dream already in place. For example, a case of torture may arise and a group like Amnesty International stands ready to shed light and bring justice. Community organizing assesses the needs of an immediate community and builds their power. In 2008, day laborers in Los Angeles won a victory that requires large hardware stores to set aside space to build shelters for the laborers to wait for hire, rather than sitting in the painful sun for hours. I have always found each to have its value. In the past year, however, I have discovered that is not a shared sentiment.

My friend who took issue with my understanding of activism and organizing clarified his own qualms with activism and support for organizing. Community organizing, he explained, builds the power of a local community to address their needs and issues. Often a faith group provides a forum for a community to voice their concerns, then set about ways of tackling problems. These topics can include anything that might affect a disenfranchised community, such as low wages, insurance redlining, lack of safe afterschool programs, or access to groceries. The work always comes about at the community’s behest.

I know a number of community organizers who dislike activism as they understand it. In the eyes of some organizers, activists sometimes have an element of distance. They bring an agenda and ideal to a possibly unfamiliar situation. To be fair, this distrust has historical precedence. In the 19th and 20th centuries, East Coast activists tried to declare what was right and needed for western Native Americans, both on and off reservations. The East Coasters changed reservation personnel, established boarding schools, created culture-ending programs, and attempted to destroy civilizations in the name of progress. This case clearly presents a worst case scenario, but other well-meaning activism throughout the years has ignored community voices, leaving a trail of unintended consequences. Even my own previous post on Chipotle caused some frustration, with folks considering me an outsider imposing my values.

What’s more, activism sometimes maintains the power of the oppressor. The case of Native Americans and boarding schools clearly demonstrates this challenge. In a more modern sense, I can sit comfortably at my computer, click on some petitions, and seemingly change the world (slactivism). As a white male from the United States, my voice carries a certain amount of “oomph” that I can throw behind different causes. Even if I challenge my own status-quo, the way I pursue that challenge does not change my stature. The author, second from left, at a School of the Americas protest in 2007.

Even in all this, I cannot be too harsh on activism. After all, the now-defunct St. Louis teen magazine Louie named me one of the people to know in St. Louis in 2007.  I was “Ken the Activist.” In high school, I helped organize protests at the School of the Americas, educational programs on race and socioeconomic class, environmental causes, and fighting the purchasing of sweatshop-made materials. Our chapter of Amnesty International/Pax Christi ran letter-writing campaigns, participating in the fight to free prisoners of conscience, end the death penalty and stop the war in Iraq. In college, I worked again with Amnesty International and as the Mission Coordinator in student government. We brought in excellent speakers like Jim Keady, organized awareness efforts, and fought gender and sexual discrimination.

Most of these issues encompassed many problems and dangers experienced by smaller communities. The death penalty in the US overwhelmingly kills black men. Our daily purchasing habits support sweatshops around the world. Fighting climate change on only an individual community level will not successfully prevent the onslaught that is coming. Community organizing can often be too slow, dismissive of allies, and insular. Organizers frequently fall into the trap of naming all things as wins or losses, falsely categorizing and alienating community members.

Reflecting on these critiques and appraisals drew me back to another similar dichotomy — charity and justice. We falsely set each of these pairs against each other. For example, charity could take the form of a food pantry, immediately alleviating hunger of the poor. Justice might advocate for increased minimum wage so workers could afford food. Some criticize charity for being too individual. Others call justice impersonal. Both charity and justice manifest differently, but are essential components to Christian love. We cannot be Christ to one another without engaging both qualities. Similarly, community organizing and activism differently manifest that love. They complement each other to give an active body to Christ’s love in the modern world.

But what to do with all the negativity? How do those reflect that love? In truth, they don’t. This spirit sows discord and distrust among those building a world of mercy, love and goodness. But by cooperating in community, we overcome those divisions. Fr. Joseph Husslein shared his life with the men who worked on the chicken cooperatives and credit unions. They collaborated, bound by a mutual faith from which poured forth visions of a better world. In our pluralistic world, we cannot always be bound by a mutual faith like Fr. Husslein and the Jesuits of St. Elizabeth’s. We must engage intentionally in our various levels of community. We cannot only think globally and act locally; rather, we must constantly think and act locally and globally. Community on all levels demands attention. We organize locally, but also acknowledge the limitedness of our locale and the need to impact the greater world. Our engagement in the wider world, however, cannot come at the cost of ignoring individual communities and the common good. We constantly deepen our awareness of the social injustices and oppression affecting our world. Most importantly, we engage the people experiencing that oppression, the way Fr. Husslein did with the people of St. Elizabeth’s.

This depth presents daunting challenges – challenges require creativity, ingenuity, joy, collaboration, and love. But if you’re already here reading this, I’m guessing that you’re up to the task.