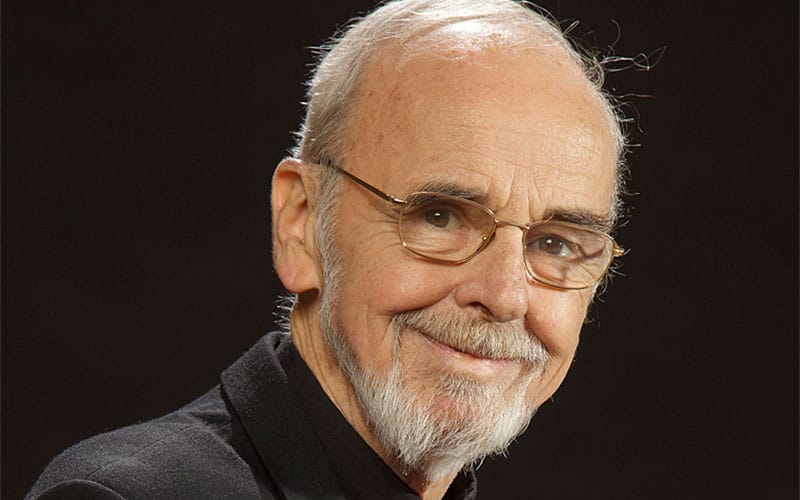 One of John Kavanaugh‘s greatest gifts, and there were many, was the ability to take a complex, clouded issue and place his finger on its exact center.  Reading one of his essays or sifting through one of his books is rather like walking through a labyrinth: there is a peaceful rhythm to its twists and turns; you are invited to look in one way and then another as you proceed; when you arrive at the center it feels like it was… inevitable all along.

He was a master at inviting others into the holy struggle for truth.  As undergraduates at Saint Louis University, we woke up early on registration day hoping to be one of the lucky ones who were able to grab one of the coveted spots his class.  On the first day he took pictures of each of us so that he could call on us by name, his black clerical suit smelling of cigarettes as he snapped away (imitation being the sincerest form of flattery, this is a strategy I admiringly adopted when I began teaching at SLU years later).  He paced alongside our desks, listened attentively to every word we said, and guided us into conversation with each other on topics of life and death.

John Kavanaugh, teacher, musician, philosopher, writer for America Magazine, loving Jesuit priest, this man who called us to lead fuller lives, died on November 5th.  It was on the Feast of All Saints and Blesseds in the Society of Jesus.

At Mass the next day in my Jesuit community more than one of us invoked the aid of the newest member of the Communion of Saints.  I spent that evening reading some of his articles, eventually finding myself drawn to his 2011 Lenten reflection for America Magazine, in which he shared these thoughts on death:

So it is with all of us. We humans have always had problems with limits on our control: of nature, of others, of evil, of our very humanity…

This is the reason for the counter-narrative of Lent… The story of the life and death of Jesus is not an instruction booklet on the renunciation of power or even control. But it is a repudiation of our false dreams of control without limits or power without constraint.

No matter what topic Kavanaugh was addressing, it felt as though there was a gentle inevitability to it, a guiding hand that lead steadily toward the fullness of life we hear from Christ in the Gospels.  He did that most notably in his classic text Following Christ in a Consumer Society.  Generations of students experienced spiritual awakenings though Kavanaugh’s ability to expose the climate of consumerism for what it is – an empty promise. Sitting in class together my classmates and I found ourselves asking odd questions: is a diamond really forever?  Why is it that we often care more for our pets than we do for our elderly?  And we loved him for helping us to ask, and to see.

Students who knew him, loved him.  Students who read him, wanted him in class – as evidenced by the many Facebook comments around the time of his passing:

It takes a gentle hand to help twenty-year-old’s admit their own weaknesses, and that skill shows in Following Christ in a Consumer Society as well.  In the book he is not just a prophetic critic of our death-dealing obsession with the empty promises of consumerism; he offers a way of reclaiming our wholeness through the life-giving personalism of Jesus.  In a world that so readily and so easily names what is wrong with the Church, Fr. Kavanaugh gave generations of students the language to challenge what is false about the world.

He was a man as impatient with ideologies that promise easy truth as he was with commercial slogans that promise easy happiness.  There is nothing easy about the Gospel, nothing easy about true discipleship, he would say.  The Gospel is called a counter-narrative for good reason: it challenges the wisdom of the world.  In a world that promises a full life through radical independence, the next gadget, and the perfect body, Kavanaugh’s work doggedly brought us back to the words of Deuteronomy:

I call heaven and earth to witness against you today that I have set before you life and death, blessings and curses.  Choose life so that you and your descendants may live, loving the Lord your God, obeying him, and holding fast to him. (30:19-20)

Is it distasteful to imagine Fr. Kavanaugh, a man who lived and worked at Mother Theresa’s House of the Dying in Calcutta, India, telling us to choose life cigarette in his hand?  I don’t think so.  Because the last thing he would want is a hagiography.

After the twists and turns of his life – teacher, scholar, musician, priest – he now finds himself at the center, holding fast to the Lord who offers him, us, life.

Suddenly, it feels like it was inevitable all along.