Secondhand Holiness: A Gift from My Grandmother 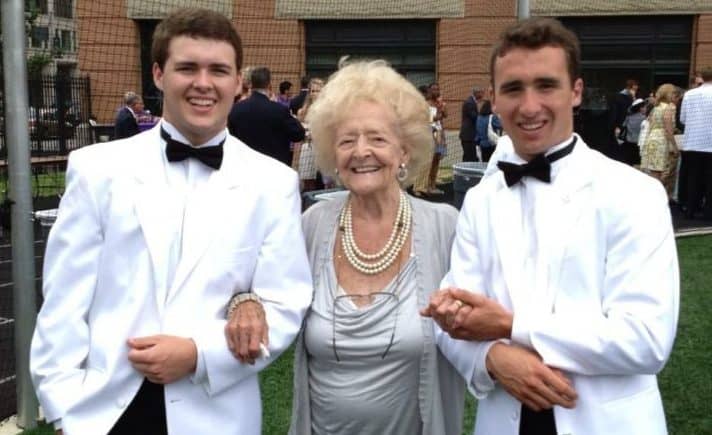 “How in God’s name did I get here?” I blurt out to the silent, grey statue of Christ Crucified. He is covered in bird droppings; hanging between oak trees on a warm, sunny, June afternoon. He doesn’t offer much by way of reply.

I am on the 8-day silent retreat we Jesuits make each year as I say this, and my question sums up, perhaps less than poetically, one of the reasons we Jesuits make these retreats. Where did I come from?, we ask. Where was God this year? Where I am being led? Where am I being called to again reaffirm my vows? How can I learn again to “see Him more clearly, love Him more dearly, and follow Him more nearly?”

But even though it sums up the broader message, I meant this question in the particular. How did I end up talking to a statue? How did I end up here — trying my best to be poor, chaste and obedient. How did I — a, gregarious knucklehead with the vocabulary of a sailor on furlough — end up in the world’s largest religious order? How did I end up a social worker on the Latino-side of a rust belt city? Or in migrant shelters in Mexico? Or working with men and women with HIV in St. Louis? Just how, Jesus, did I end up here?

The silence in reply to my query is thick. Then a single word pops into my head: “Grandmother.” I smile. Of course, I think, Grandmother is to blame for all this.

Mercedes Josephine Galway McCarthy, my own Grandmother, was a force to be reckoned with. A force of class and of poise. Covered in lace and pearls, she did not suffer fools lightly. As long as I knew her she was called “Grandmother,” never Grandma, or Nana, or any other diminutive take on her title. Mer, as she was known to her friends, was a transplant to America’s capital from Newfoundland, and she carried with her that unique Irish-Newfoundlander brogue — as well as the dignity of seeing herself as one of the Queen’s subjects, a citizen of her Empire.

She imposed order on the world as she moved through it. Tablecloths were straightened, shirts tucked in, as she passed. When I had friends over to the house I would whisper a set of instructions to them before we entered the house, “Grandmother is here,” I would say. “Before greeting my parents you must go to Grandmother first. And, I know this is weird, but everyone calls her Grandmother, not Mrs. McCarthy. Lastly, she is going to kiss you, full on the lips. Do not resist.” I would pause, then, gauging their reaction, before finishing my admonition: “Consider yourself warned.”

My friends who were regulars knew the drill, and Grandmother took to them like they were part of the family. The new ones, although a little shocked by the kissing bit, caught on quickly, mostly because Grandmother was a magnet for laughter and conversation. She was the kind of woman who, with words as sharp and crisp as her starched tablecloths, could describe how Ross Douthat’s latest editorial was perfectly wrong, and in the next moment, and with equal eloquence, describe how Anna Wintour’s vision for her spring line was just right. Her erudition came, partially, from her morning reading, which religiously covered three things: Vogue, The New York Times, and her daily Missal.

In the evenings I would find her sitting in her high-backed chair drinking Johnnie Walker in a martini glass with a single ice cube. Seated upon her throne, there was never a doubt who was the matriarch of the McCarthy clan.

“Jaysus, Mary and Holy Saint Joseph! Glory be to God!” Grandmother exclaims. There are tears in her eyes. I have just told her that I think I am going to become a Jesuit.

I am crying too, mostly because she is so thrilled by the news. She is so thrilled, in fact, that she has thrown her frail body into my arms. Despite being a foot taller and 60 years younger than her, in that moment, I was certain she was the one holding me. She is the person I was most excited to tell, but she was also the one I was most nervous about telling because, somehow, I felt that telling Grandmother about my desire to be a Jesuit made it more real, more dangerous; more confining. It was her blessing that I was seeking as I started walking this terrifying path.

In true Grandmother style, she hadn’t even finished embracing me — or wiping the tears from her eyes — before the reproach came. “But Matthew-darling,” she said, “the damn Jesuits? Why the damned Jesuits? Why not the holy Christian Brothers or the God-fearing Franciscans?” (It should be noted that Grandmother sent all of her sons and nearly all of her scores of grandsons, myself included, to Jesuit schools for both high school and college). I can only laugh — fully and joyfully. And she laughs then, too, and I ease her back onto her throne.

It’s then, between sips from her martini glass, that she tells me, “You know that your mother has been telling me stories of your behavior… come to think of it, those Jesuits might be the only group equipped to handle the likes of you!” Then she laughed again. Her smile straightened before she said, “It is nice to see that my prayers have paid off. After all these years, finally a religious in the family! You’re welcome!”

There it was, the full arc of Grandmother. There she was, all her glory on display in a matter of moments: pride, reproach, faith, laughter, authority, prayers, and mostly, mainly, irreplaceably: love. Most of my childhood memories of Grandmother involve “going to church”. This was due, in part, to being a member of a colossal and fertile Irish Catholic family, going to church was part of every holiday: religious and secular. As a child I never knew the difference between the two, because every holiday, baptism, or anniversary of my Grandfather’s death involved putting on a tie, going to Church, and having a feast at an aunt’s house afterwards where I could take off my tie and play with my hordes of cousins in the basement. Looking back, I see the role of grandmothers in the larger tapestry of our faith. Grandmother colored the way I see the world so deeply, the way I see myself within it. All grandmothers color the way we see the world and see ourselves in it. They call forth from us our very best. As children, that may have meant proper manners and saying our prayers. As adults, that means living authentically, with humility, knowing your life is meant to be of service to something larger than ourselves, for others. Grandmothers, and women of faith in general, are living witnesses to the resurrection through endless acts of mercy. Grandmother evangelized me, unbeknownst to me, through her joy, her service and her prayers.

Grandmother went home to the God who loved her into being the same week I bound myself to God by taking vows of poverty, chastity, and obedience. Two paths that both lead closer to the Jesus that she loved so dearly. She did not make it make it to my vow mass. Words fail to describe how much I miss her.

The last time I spoke with Grandmother on the phone, in her last days on earth, she was mostly incoherent. I carried on, talking of the vow mass, of who was coming, of what I had done that summer — trying to again play my part in our repartee so that she might remember how to play hers. But she couldn’t. Couldn’t at least, that is, until the end of our conversation, when she bid me farewell the same way she always had, “I’ll pray for you, Matthew, darling.” It was enough.

I think of all this on a stone bench in front of a stone statue of the Crucified One, the One who does — sometimes, in some ways — answer our questions. “How did I end up here?” By the love of God and the love of my Grandmother.

And then come the tears, just as they had while holding Grandmother five years before.

mwootersj@thejesuitpost.org   /   All posts by Matt