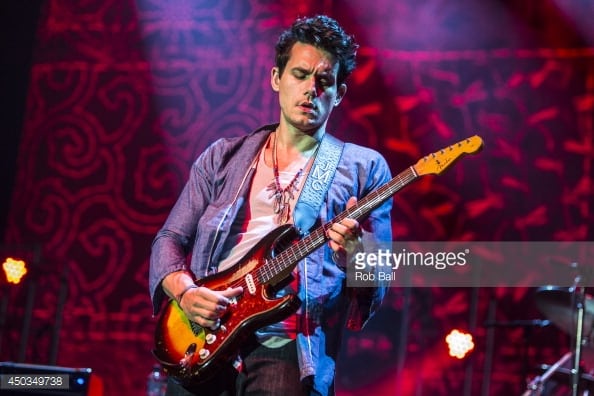 It was the summer of 2003 and the Counting Crows and John Mayer embarked on a US tour. Me and a couple good buddies went to see the Crows hoping they were the headliner. Nope. The headliner was this skinny guy in his mid-twenties in a t-shirt with his band and his guitar.

I didn’t come to see John Mayer. I thought he was “poppy pop pop”. “Your Body Is a Wonderland” and I’m not interested. Girls go Ga Ga and I go OK pal what you got? Turns out he had more than I ever knew he had. When he played, I didn’t hear anything but his guitar. And O that guitar. According to my friend Drew, that guitar brought tears to my eyes.

I was a man who spent his college years listening to Zeppelin and Jimmy Page, Hendrix, Clapton, Stevie Ray Vaughan, even a little Robin Trower.1 These are some guitarists man! The best and brightest! And this skinny guy reminded me of all of them and somehow sounded such that he was taking it to a whole-nother level. All I remember is Mayer’s guitar screaming into the night and illuminating the sky with every lick and sensationally stunning run. Then I forgot all about Mayer. His music just didn’t reach me.

Many years later, I encountered Mayer’s Born and Raised album. I was in my late 20’s feeling like I was still very much trying to find my way. I was asking the big questions and was trying to retrace my steps, examine my conscience, and wonder where to go from here. When Mayer was singing “all at once it gets hard to take, it gets hard to fake who I won’t be” he was singing straight to me, singing to my soul, to the depths of me. Mayer was singing to me and I was like, what in the world? Who is this man? I thought I knew. I didn’t have a clue.

Turns out he didn’t have much clue either.  He was finding himself right before my eyes, letting go of whatever wasn’t true and beautiful and everlasting. Like me, Mayer was undergoing a transformation. A much needed one. After a pair of interviews featuring a certain shallowness and insensitivity, he became hounded by the media and a persona non-grata to his peers.2  So, seeking rebirth he took off for for Montana in 2010 where he examined his conscience.

This year, when asked by NPR how he got over being perceived as a shameful inhuman womanizer, he literally said: “just die and come back to life.” What? Die and come back to life? That’s crazy talk man. That’s what spiritual gurus say. That’s what people say after they’ve gained wisdom and realized it ain’t about them, it’s about who they are becoming, about who they desire to become, and what they are doing with their gifts. After his awakening, Mayer doesn’t get himself wrapped up in what other people (most of whom “don’t care about him anyways” are saying). He doesn’t get wrapped up in the cycle of shame anymore.

So, reborn in the hills, he “found home”. Which is to say, he started to accept himself. He began to accept his limitations, his shortcomings, and his fears of failure. He became rejuvenated in mind, body, and spirit. In his words he became “a man”, he became a “grown-up”.

What’s more important is why Mayer had to “find home”. From a 2012 Rolling Stone profile:

The kid had his own worries. For one, his parents fought a lot, which he says led him to “disappear and create my own world I could believe in.” Also, he’d begun to suffer from anxiety attacks and feared ending up in a mental institution.”

He sought psychiatrists and therapists to help cope. He would often deal with his anxiety by isolating himself in his room to play guitar.

At the height of his stardom, his anxiety largely involved his fear that his career as a musician and the fame that comes with it would flame out if he wasn’t being lavished with praise. He was anxious because he was constantly worried about his persona in the public eye. He wanted to give flawless performances to gain the approval of the masses. He wanted to impress and please. One negative comment about a song or performance would send him into ruminations that would only intensify his anxiety and leave him feeling ashamed.

The problem with shame is that I feel like I am unlovable as I am. Shame is poisonous and it is linked to my anxieties over whether I “measure up” or not. Shame often isolates me and leaves me lonely and afraid. Mayer has had his fair share of experience with loneliness as I’m sure I’ve had and will have again.

When Mayer and I reject our imperfections we reject ourselves. We shame ourselves into believing we are a bad person. This shaming entraps us in fear and anxiety. It keeps us from being free to love, to express compassion and courage. When I am courageous enough to open up and be honest and transparent like Mayer does in his music, he and I can help those we open up too and ourselves in the process.

I’m grateful John Mayer endured the trials he did as a budding teen and has the imperfections he has as a self-proclaimed “recovering ego addict” so he can write music that literally calms the anxieties of others and keeps them from having their own panic attacks.  Thank God for that skinny kid who can wail on guitar.