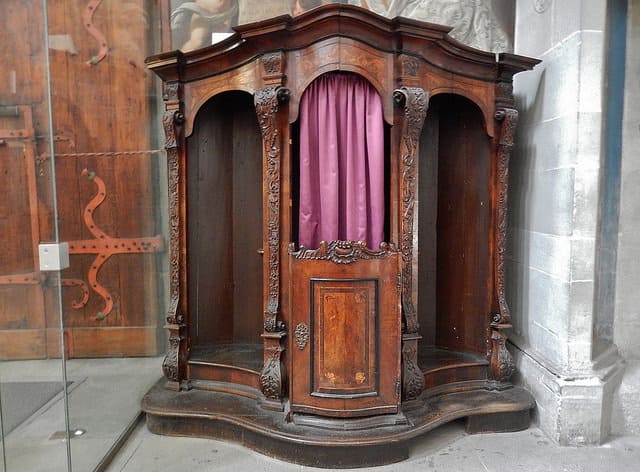 Despite having just had eight years with our first (and only) Black president, racism continues to shape so much of the reality in our country. We can see this in the continuing gaps in wealth, education, and incarceration that in some cases have even widened. And so as always, but maybe just more clearly after this election cycle, there is a real need for racial reconciliation. But is that where we’re currently going?

“Reconciliation” is used in many ways and for many purposes, but its necessary first step is a deep acknowledgement of the truth, no matter how unpleasant or uncomfortable. Catholics know this well from the Sacrament of Reconciliation which teaches us that before we can move forward, we must first examine ourselves to get to the deeper roots behind our sin. Only by courageously admitting the truth of what we’ve done can reconciliation happen. Likewise, in these admittedly scary times, it’s clear that yes, as a country we must work for reconciliation, but we need to also realize that this can’t happen until we are willing to fully face our country’s intensely racist past.

How We Look Back

What are some of the damaging and false ways we look back on the past that prevent reconciliation in the present? I remember my introduction to the “good and evil” lens with which we learned about the Civil Rights Movement in elementary school. There were the clear good guys (“us”: more advanced, progressive Northerners) and the clear bad guys (“them”: backwards, bigoted Southerners) as our textbooks encouraged us to forget the deeper, messier realities. I was grateful, for example, to learn about events like the desegregation of public schools in the 1954 Brown v. Board of Education decision. The sad irony, lost on me at the time, was that everyone in my class pretty much looked the same.

Thankfully, I had dedicated teachers who taught us to dig deeper into our history to get to the truth of what really happened. For example, what is not often taught in Civil Rights History is that Dr. King also marched in Chicago as part of the fight to desegregate housing. After facing continuously brutal violence while marching in all-white neighborhoods he said: “I’ve been in many demonstrations all across the South, but I can say that I have never seen – even in Mississippi and Alabama – mobs as hostile and as hate-filled as I’ve seen here in Chicago.”

But aren’t Northerners supposed to be the good guys?

Another way we can look at the past is through the “good old days” lens, which holds that at some point everything was great in America. The problem with this view is that it has little grounding in truth and it tends to whitewash the serious wrongdoings on which our country was built. A clear example of this was in 2010, when the Texas Board of Education approved certain changes in their history curriculum. One such change was the subtle renaming of “slaves” to “workers.” If not for the objections of a concerned student and his mother, this change could have remained, erasing the reality and legacy of the millions stolen to build our country.

Side stepping or simplifying the truth is more attractive because it’s easier, at least in the short term. It’s definitely easier than facing hard realities like hearing James Baldwin (quoting Malcolm X) remind us, “the most segregated hour in American life is high noon on Sunday.” It’s more comfortable to proclaim “color-blindness” or to tweet #alllivesmatter than seek to understand why too many in power act as if Black lives don’t matter. But when we replace the truth with lazy, simplistic, or inaccurate history, we can’t possibly begin to work toward reconciliation. This is because reconciliation doesn’t magically happen; we have to work for it in truth.

An Example of Reconciliation

In the aftermath of the Rwandan genocide of 1994, the new government was faced with the question of how to heal in a country where many perpetrators and survivors still lived side by side. Given the choice between overburdened courts and indiscriminate revenge, the new government chose to revive a traditional, community-based justice system called Gacaca (“justice among the grass”). Here, local tribunals would determine the truth of what happened with the help of witness testimony in the hopes that the country as a whole would reconcile. Though not perfect, this process is conducted with brutal honesty, in the communities where the killings took place, and in the presence of the survivors. The result for many communities in the country has been peace, renewed trust and long-awaited closure. I don’t pretend to know the difficulties of this experience, but it seems that without it, 1994 would likely have been just another chapter in a book of ethnically-fueled mass murders.

Gacaca is just one example. There are other such structures, as well as dedicated individuals and groups, rooted in the recognition of truth that have helped communities and countries move forward in authentic reconciliation when times seemed darkest.

Reconciliation is tough and takes hard work. But, if we hope to truly reconcile, there’s no other way but to look honestly and critically at our history. Then we need to embrace the messiness of its truth.

Whatever our political views, we’ve become too willing to allow facts and reality to be changed because they make us ashamed. However, the consequences of this are clear if we have the courage to look. This goes for racial divisions as well as the many other fault-lines that we pretend not to see, but which still hurt people. If we keep allowing the truth of our past, the truth of how we really got here, to be distorted for any agenda, the cycle is guaranteed to continue and there will never be actual reconciliation.