The Making of “Silence,” part I James Martin, SJ, editor at large of America Media and author of many books, including Jesus: A Pilgrimage and The Jesuit Guide to (Almost) Everything served as a consultant to Martin Scorsese’s new film “Silence.”  In this interview, he speaks in depth with two TJP writers, Brian Strassburger and Dan Dixon, about the process of helping Mr. Scorsese and the actors create a beautiful new film about the Jesuits.

Today we are sharing the first half of the interview. Check back for Part II on Friday (12/23).

Brian Strassburger (BS) and Dan Dixon (DD): Thanks so much, Jim, for agreeing to take the time to respond to our many questions about “Silence.” We are so pumped for the release this Friday!

James Martin (JM):  Thanks for inviting me to discuss the project.

BS/DD:  We’re interested to know about your involvement in the making of the film. Were you involved with the script at all?

JM: Initially, I was contacted by Martin Scorsese’s office, two years ago, to help with two areas: the writing of the script and the preparation of the actors.  In addition, I ended up putting them in touch with other Jesuits who could help.  So, I was far from the only Jesuit consultant: people like Antoni Ucerler, SJ, Dave Collins, SJ, and Jerry Martinson, SJ from Taiwan all pitched in.

At the beginning, I worked with Marianne Bower, Mr. Scorsese’s researcher, who had read The Jesuit Guide, and wanted to know as much as she could about Jesuit life.  Then, Marty and Jay Cocks, his co-screenwriter, asked me to help them with the script, which I was happy to do.

The script was already superb, but I thought it needed to be “more Jesuit,” for want of a better phrase.  For example, there was little reference to the Spiritual Exercises, which would certainly have been in the hearts and on the minds of the movie’s protagonists, Father Rodrigues and Garupe. That would have been the lens through which they saw everything.  There was also a bit of confusion on the part of Father Rodrigues early in the narrative about why he would be suffering so much—when he would have asked for this in the Exercises 1.  Also, I suggested a bit more clarity about why the two young Jesuits felt the need to go to Japan to look for Father Ferreira, their mentor- specifically, they would have been concerned that his soul was in danger.  And I suggested more scenes that showed the joy of their ministry.  One of my points was that if the movie simply portrayed scenes of their suffering and persecution, their Jesuit vocation would make little sense to the viewer.

Overall, I tried to make suggestions to help the screenwriters to understand how a Jesuit might think, act, speak and even pray—for example, more free-form prayer rather than formal prayer.

BS/DD: Did you work with everyone in the cast?

JM: I worked with the English-speaking actors, Andrew Garfield, Adam Driver and Liam Neeson, in various degrees to help them prepare for their roles. Andrew was the one with whom I worked most closely, leading him through the Spiritual Exercises (the 19th Annotation) over the course of several months, and having conversations outside of spiritual direction about Jesuit life and spirituality.  Also, Adam and Liam were both very interested in finding out more about Jesuit spirituality, though Liam had already worked with Dan Berrigan, SJ during the filming of “The Mission” in the early 1980s.  Plus, one of his sons attends Fordham Prep.

BS/DD: Were you on set during filming?

JM:  No, I wasn’t on set in Taiwan.  As I told them, I have a job at America Media!   Plus, Jerry Martinson, SJ, in Taiwan was extremely helpful to them and put them in touch with plenty of Jesuits during the shoot.

BS/DD: What was it like working with Martin (Marty) Scorsese?

JM: Honestly, he’s a delight.  In about five minutes I felt comfortable with him.  As I recall, our first meeting was at his house in Midtown Manhattan with his co-screenwriter, and we had a very long talk about the script, which I had read.  Marty is incredibly articulate, widely read and very devout.  You could sit him down in any Jesuit community and he would be more than able to enter the conversation.  He was also extremely open to suggestions and changes, even toward the end of the editing process when you might think that he’d be more “settled.”

[WARNING- Spoiler alerts ahead, skip to the next question if you want to avoid them.] 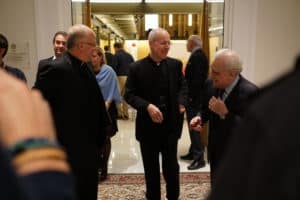 After the screening of “Silence” at the Pontifical Oriental Institute in Rome, on Nov. 29, Martin Scorsese with James Martin, SJ (center) and Alan Fogarty, SJ (left), president of the Gregorian University Foundation.

At one point, just a few days before the film was finished, he was thinking how the film might end, that is, after the final scene, and I tentatively suggested a note about the Japanese martyrs and then “Ad Majorem Dei Gloriam.” And that’s what they ended up using.  In other words, Marty was extremely down-to-earth, friendly, accessible–and very, very open to suggestions.  I would imagine that’s one thing that makes him so successful a director.

BS/DD:  Can you tell us how the Jesuit screening, the “world premiere” in Rome came to be?

JM: The Scorsese people told me they had been invited to a “Vatican screening” of the film, and, as people now know, an audience with Pope Francis.  And they invited me to come along to Rome for the screening.  Initially I wasn’t sure if I should go all that way, but then I thought that I would ask if they might invite the Jesuit Curia—Father General and his staff.  Then I thought, “Why not have a Jesuit screening?”

Fortunately, across the hall from me at America House is Alan Fogarty, SJ, the director of the Gregorian Foundation, which raises money for the pontifical universities in Rome.  I don’t know Rome very well, so I asked him where might be a good place for the screening. And he responded, “I have just the place!  The Pontifical Oriental Institute has just renovated an aula and it’s perfect.”  Within about five minutes, he called David Nazar, SJ, the rector, and immediately we had the place and date set.

The Sunday before the screening, we all went to an English-speaking Mass at the Oratory of St. Francis Xavier (the “Caravita” community) next to the Church of St. Ignatius, and then were invited to pranzo at the Gesù community, with something like 80 Jesuits in formation—from 27 countries.  Orlando Torres, SJ, the rector, and Tony Sholander, SJ, the minister, arranged a beautiful meal for us, and it was very moving for me to be able to introduce Marty and his family and colleagues to all these young Jesuits.  I felt like it was kind of a thank you for all he had done for the Society.  After all, from now on, when people think of the Jesuit martyrs of Japan, and the Portuguese missionaries, they will likely think of this movie.  At the end of the meal, the Portuguese Jesuits in the community came up to him, and I said, “These men are from the same Province and are the exact age as Fathers Rodrigues and Garupe.” Adam Hincks, SJ (center) leads a tour of the Rooms of St. Ignatius Loyola in Rome for Martin Scorsese (left) and his friends on Nov. 27. James Martin, SJ, is seated next to Mr. Scorsese.

Afterward, Adam Hincks, SJ, and Christian Saenz, SJ, who are studying in Rome, and Dave Collins, SJ, who was a delegate at the General Congregation and is now there for an academic sabbatical, gave us a tour of the Rooms of St. Ignatius, the Church of the Gesù and the Church of St. Ignatius.  It was really profound for all of us, certainly for me.  Marty had never been there, and now here he was, after having spent 30 years making a film on the Jesuits, at these holiest of Jesuit sites.  And I was so proud of Adam and Christian, who did an amazing job recounting the history of these sites and the story of St. Ignatius.  Somehow being with these young Jesuits made it all the more powerful for me.

And the screening was amazing.  I was worried that Jesuits in Rome might be too busy (or the technical stuff wouldn’t work) but the Orientale was packed with about 350 Jesuits that afternoon, mainly young guys, from around the world, and the film looked beautiful. During the screening, you could have heard a pin drop.  Marty and his family were there, as was Jay Cocks, and Thelma Schoonmaker, the film’s editor.  Afterwards Marty had a question-and-answer session, and he told me afterwards how impressed he was by the depth of the questions.  One question from Danny Huang, SJ, the regional assistant for Asia Pacific, impressed Marty so much that he later asked me to track down Danny and ask him for a copy of his comments.

BS/DD: Speaking of great films that portray Jesuits, the 1986 film “The Mission” starring Robert De Niro is practically “required-viewing” for Jesuit enthusiasts. How do you think this movie will compare?

JM: I’m biased of course, but I think “Silence” is superior.  I love “The Mission,” but I don’t think it does as good a job of portraying the Jesuits from the inside out. I don’t feel that we get to know the Robert De Niro and Jeremy Irons characters as much as we do Andrew Garfield’s character in “Silence.”  There’s a much, much deeper sense of his relationship to Jesus.  And I do think “Silence” will be required viewing.  In fact, I first saw it with a few colleagues from America, and afterwards one of the Jesuits leaned over and said, “This will be shown in Jesuit schools from now until the end of time.”

Editor’s Note: This concludes Part I of our interview with James Martin, SJ. Be sure to return to the site this Friday (12/23) for Part II, which will go more in depth about what makes “Silence” such a powerful film.