The Calling of the Matthews 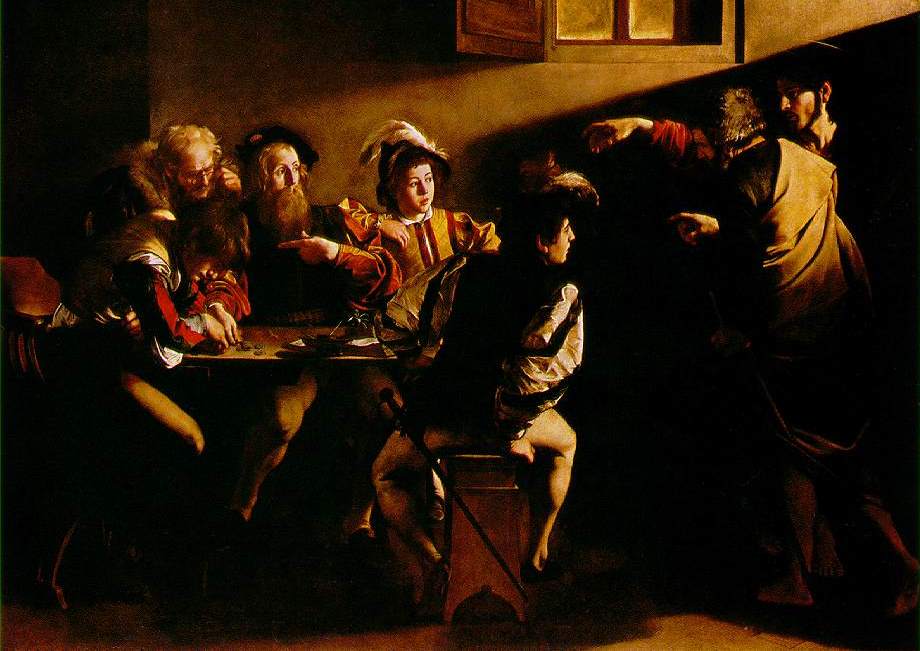 The Inspiration of Saint Matthew

I have some serious theological problems with the model of biblical inspiration depicted in The Inspiration of Saint Matthew by Caravaggio,1 but I have absolutely no problem with the painting itself. It pops. One cannot not notice it, and thus I hung a print of it just inside the door to my office during my years teaching philosophy, figuring it would catch students’ eyes and make them feel welcome, dare I say…inspired.

The painting is part of a set of three scenes from the life of St. Matthew — the erstwhile tax collector, the evangelist formerly known as Levi, the guy with the cut-and-dry call story in each of the first three gospels (cf., here, here, and here).

I decided to place the first of the scenes from Matthew’s life — The Calling of Saint Matthew — just above my desk chair.2

I had two motivations for placing this print where I did. First, and most practically, I figured that when the attention of visiting students inevitably wandered from what I was saying about Plato or Aristotle, these people might enjoy beholding some famous art. This first scene is, at least in my mind, easily the most well-known of the three. But I also had the loftier idea that the dramatic moment of Jesus’ pointing to Matthew, the poor sap on the far left of the picture who is mindlessly shuffling around his shekels, might spur my students to recognize that Christ was calling them to something too. I wanted them to become students not just of philosophy, but of this most fundamental dynamic of the Christian life: God calls us into friendship, and we have the chance to respond not just with words, but with our whole lives. If I am completely honest, I suppose I wanted them to join me as fellow students trying to learn this lesson.

Eventually, I left Scranton and teaching for Boston and student-ing…again. The life of a Jesuit, especially a young Jesuit, consists of a great deal of going back to school. I took my Caravaggios with me and hung them in my room. There was no real logic to their placement around the room because I only occasionally received visitors, and they were all Jesuits, who like to pride themselves on being immune to the sort of subliminal messaging I had put in play in Scranton.

Still, one day, a friend remarked how much he liked the print of Matthew’s calling, saying something like, “I love the look on his face, how he’s stunned that Jesus would be interested in him.” This was something I had never noticed before. Indeed, I could hardly make out any sort of facial expression on Matthew. As our conversation continued, however, it occurred to me that we were talking about two different figures. He thought Matthew was the third figure from the left, the guy with the beard, the guy pointing at himself as if to say, “Who? Me?!” The Calling of Saint Matthew

My first instinct, of course, was to resolve this right away and prove that I was correct, but an informal polling of other Jesuits and lay friends did not turn out well for me. Apparently, most people think that Matthew is the third figure from the left…the one with a whole lot of light on his face…the one who is in the center of the group sitting at the table…the one who looks an awful lot like the Matthews in the other two paintings in this series. Details, details. Luckily for me, not everyone is on board with this interpretation. This article from the Italian press lends some scholarly and even papal support for my minority position, and no less a source than Wikipedia makes mention of this same controversy.

Of course, more than right-or-wrong is at stake here. If Matthew is, as I have always assumed, the figure on the far left, then the scene we have before us is a snapshot of the moment just before he lays eyes on Jesus. We see him right as his whole life is about to change from being about the unscrupulous work of collecting taxes, to one that will include authoring one account of the Gospel and suffering martyrdom for the sake of the figure at the center of the Gospel. Like this detail of Michelangelo’s Creation of Adam from the Sistine Chapel, or, tragically, this photograph taken only seconds prior to the assassination of John F. Kennedy, this reading freezes an instant just before something profoundly dramatic or paradigm-shattering happens. These are rich, pregnant moments, moments of unbounded potential.  I like these moments, and I suppose this is why I have always clung to this interpretation of the painting.

The other interpretation, the one that links Matthew with the figure pointing at himself, is no less rich. To my mind, this take emphasizes the audacious character of Jesus’ public ministry, which in turn teaches us something about relationship with Christ in any age. The tax collector was someone to be spurned, or, at best, ignored. Matthew’s shocked facial expression shows that he understands this societal dynamic well, but his look and gesture may indicate even more than that. Even if this guy gets over the fact that I’m a tax collector, how could he ever be interested in me?

These two readings are, quite obviously, not exclusive, another indication, perhaps, that Caravaggio really has produced a classic. The more I think about it, though, the more I wonder if all five of the figures seated around the table tell us something about being called by Christ.  Stick with me here. Admittedly, I have virtually no training in art history, and I may even be a little guilty of trying to straitjacket a Caravaggio into a five-part schematic, but I think we can see those five figures representing different “stages,” if you will, of a reaction to Christ’s invitation of friendship. Note: I am not suggesting that I have uncovered a Caravaggio Easter Egg.

Let us begin with the leftmost figure — my sorry sap of a Matthew — and move to the right. For convenience’s sake, I will number the figures 1, 2, 3, 4, and 5.  Here is the painting again, so that you don’t have to keep scrolling. You’re very welcome… By this point, I trust I have said enough about 1, and so that makes 2 a depiction of the moment when eye contact is made, when a calling is heard. There are moments of disruption in our lives when we really can be particularly attuned to the irruption of God’s call to friendship that is constantly surrounding us. I think that 2 shows us what that might look like.  Then there is 3, who has what ought to be the universal reaction to Christ’s invitation: Really? Me? Yes, you. This schematic makes 4 the one who has to weigh all this. And then there is 5.  His weight is shifting toward Jesus. He is preparing to stand, to start a different life, to walk into tomorrow, to be the subject of the next two paintings.

Does this cover every wrinkle of the profoundly complex yet delightfully simple phenomenon of friendship with Christ? Of course not. Not even Caravaggio can manage that.