The scenario is always the same. It’s early in the semester, just a few days into my Introduction to Theology class. We are discussing the existence of God, which has always struck me as a logical place to begin a class about, well, God.

“I want to ask you a very personal question,” I begin, “but you have to agree to answer it before I tell you what the question is. Any volunteers?”

The reaction is (almost) always the same. One or two of the class extroverts will ante up, bravely wagering that whatever I will ask will not be too shame-inducing in a room full of their college-aged peers.

What happens next is, again, always the same. I ask: “What is the best flavor of ice cream?” Various answers pour forth: “cookie batter,” “Cherry Garcia,” “white mint chocolate chip, not the green kind!” and then someone will inevitably and indignantly proclaim “green mint chocolate chip, not the nasty white kind!” This, I should note, is one of the more impassioned discussions of the semester. (Who says ideas don’t matter anymore?)

Students are also quick to inform me that there is no objectively best flavor of ice cream, because this is a matter of personal preference and judgment. It is an opinion, not a fact. So far, so good.

I then flash a slide with a picture of the Rocky Mountains and the question: “Do the Rocky Mountains exist?” Fortunately, there is unanimous agreement that they do, in fact, exist. Students hold firm to this even though few of them have ever seen said mountains. They accept the existence of something they have not seen on the basis of photos (like the one I show), or the reports of trustworthy people (like teachers or cartographers). Finally, I show a slide with the question: “Does God exist?” And the reaction is always the same: no skyrocketing hands volunteering to answer, even among the theists in the room. No one will even make eye contact with me, for fear of being cold-called. “Okay, fine,” I continue. “Then at least tell me which of the first two questions this third question most resembles?”

The overwhelming majority believes that the question “does God exist?” most closely resembles the question “what is the best flavor of ice cream.”

They are wrong, even if they are wrong for an interesting reason. Students instinctively confuse two separate categories: personal opinion on one hand, and factual questions where conclusive evidence may be elusive or (at present) unavailable. Objectively speaking, there either is a God or there isn’t. The favored third option (“I don’t know.”) reflects the current state of one’s evidence about the question, not objective reality. Coloradans will be happy to know that the Rocky Mountains continue to exist independent of whether I think they exist. Ditto for God. “I don’t know” is the answer to the question “Do you believe in God?” This is different from “Does God exist?” and its cousin, “How can we know whether God exists?”1

This is a hard point for many students to grasp, especially on the first bounce. But it is crucially important. Think about what’s at stake in the implication that any proposition that cannot be conclusively proven by authoritative evidence is, therefore, a matter of personal opinion. Most often, when I press for what would count as evidence for God, people express a desire for some kind of “scientific” proof. This is true even though most humans (including my students and me) have only passing familiarity with the scientific method, let alone the ability to interpret scientific data.

It is also true even though science is uniquely unsuited for “proving” all manner of things. As just one example, when the science card gets played in our conversation about evidence for God I ask students to call to mind an important person in their life that they love and who loves them back. After allowing them to revel in that thought for a brief moment, I ask whether “science” (meaning the natural sciences) can prove that the person they have in mind – mother, father, friend, significant other – loves them?

Of course it can’t. And at this point, even the science majors glower at me, which I’ve learned interpret as “no, and thanks very little for the reminder.” But if science can’t even do that, then why would we expect it could “prove” anything about God, including God’s existence? With due respect to those we love, God seems a considerably bigger ticket item.

Apparently my classroom is not the only one plagued by this murky line between “fact” and “opinion.” Just this week, philosophy professor Justin P. McBrayer published “Why Our Children Don’t Think There Are Moral Facts” in the New York Times. Addressing some of the same trends I have seen in class, he argues that a weak understanding of the difference between fact and opinion has led students to view specifically moral judgments as mere matters of personal opinion. McBrayer is hardly the first to observe this phenomenon, but few have diagnosed it – and challenged it – so succinctly. He notes:

I’m happy to say that, anecdotally, most people I know adhere to the kind of moral relativism McBrayer identifies rather inconsistently. Indeed, even if opinion is split about whether plagiarism or digital piracy is objectively wrong, consensus tends to build when the topic turns to cheating on one’s significant other. Bring up the Holocaust, 9/11, or the recent beheadings perpetrated by ISIS and the dictatorship of relativism transforms into the province of moral absolutes at breathtaking speed. And we should be glad about that. 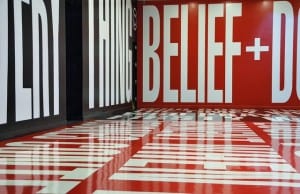 That said, not all judgments are as clear-cut as the morality of, say, infidelity or mass murder. The hard work, and the work we’re not doing very well, is helping young people (and old people, for that matter) think with rigor and clarity about why and how we can justifiably conclude that certain beliefs are true and others are false even with imperfect evidence.

This is the task of inhabiting the vast intellectual “gray areas” in which we live, and move, and have our being. It is the task, in other words, of being a person who – through no fault of our own – has been given a brain and the inclination to (occasionally) use it. The particular ambiguity (God’s existence, morality, politics) matters little. And in the end, McBrayer has it exactly right:

The hard work lies not in recognizing that at least some moral claims are true but in carefully thinking through our evidence for which of the many competing moral claims is correct. That’s a hard thing to do. But we can’t sidestep the responsibilities that come with being human just because it’s hard.