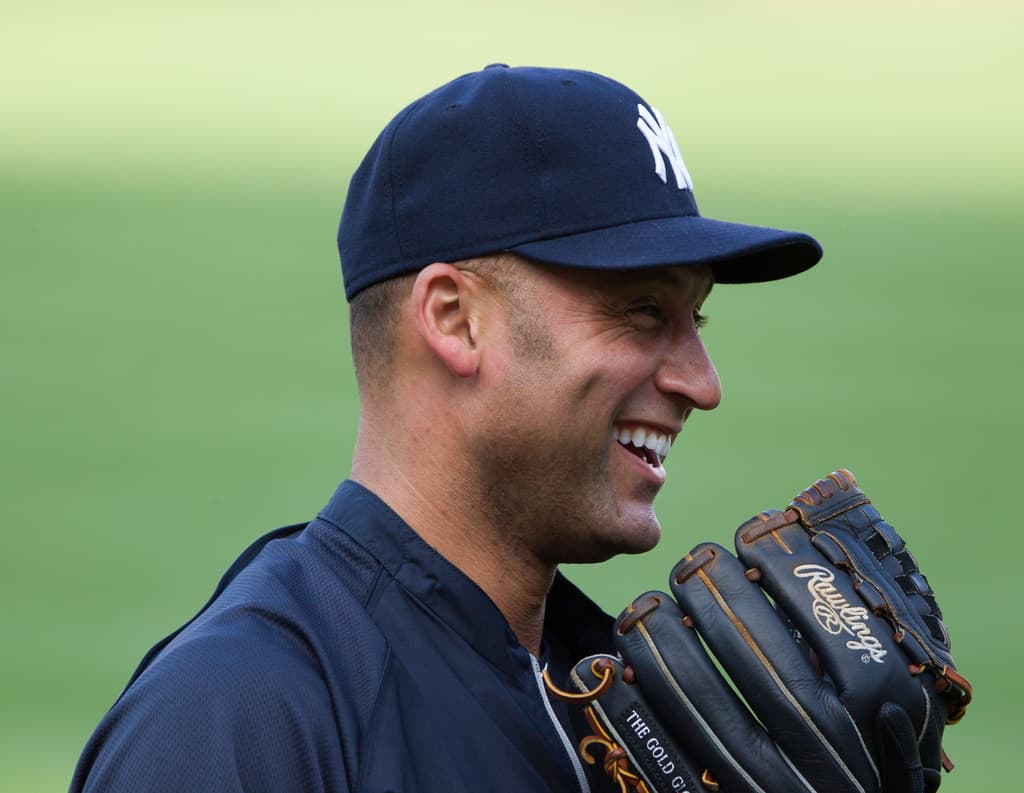 When we come home at the end of the day, before we turn on the lights in the house we know where everything is. That’s where I throw my keys, my coat goes here, shoes go there, my fridge is here, and the remote for my TV is here. Derek Jeter has been like that for me, and for many baseball fans, for almost 20 years. That’s why I like Derek Jeter: He’s been a reliable part of my baseball-following routine for all that time.

But I don’t like Derek Jeter because he’s a great baseball player.  I like him because he’s become, as fellow Fordham alumnus Michael Kay says, “part of the furniture” of my life.

I know exactly where I was at 11:04pm on Saturday, October 26, 1996. I was 16 years old and I was in the basement of my parents’ house in upstate New York.  Along with my father, I was watching Yankees’ third baseman Charlie Hayes catch Mark Lemke’s foul pop up on the third base side. Just before the game’s final pitch settled in Hayes’ glove, 22-year-old Derek Jeter’s arms shot into the air in jubilation before he, Hayes, and the rest of the Yankees mobbed John Wetteland on the mound.

The television we had then was a leftover from the 80s, one of the pieces of furniture that we took with us when we moved from Dutchess County several years earlier. Before plasma, HD, LED, LCD, flat screen, a good television was a nice piece furniture. Ours was massive, encased in wood; it sat on the floor because it was too heavy to put on a table. A good television was well made.

I watched Derek Jeter end his American League Rookie of the Year season on that piece of furniture beside my father. For that season, and for most Yankee games over the last 18 years, Derek Jeter has been a fairly consistent presence in my baseball life. He’s like that old TV set in my parents’ house: always there, in the same spot. Functional and dependable, if not flashy.

Every spring, summer, and autumn, I could tune into WPIX, MSG, the YES Network or MY9 (WWOR) to see Number 2 take his familiar position at shortstop, and have a few of those at-bats with the same inside-out, opposite field swing. Each season, I’ve listed to John Sterling call games on WCBS 880AM radio with a number of sidekicks throughout the last 18 baseball seasons: Michael Kay, Charlie Steiner, and now Suzyn Waldman. Like those Yankee announcers, Derek Jeter has been with me through the end of high school, onto college in the Bronx, through my real first job, one graduate degree, my entrance into the Jesuits, profession of my vows, another graduate degree, regency, and now back to school again. While I have moved several times and travelled quite a bit of the globe, his presence between 2nd and 3rd has been steady, reliable. Indeed, throughout my entire adult life, Derek Jeter has been the Yankee shortstop.  I’ve seen him play during dozens of trips to both Yankee Stadiums, and a number of times on the road.  I’ve seen him in person during the regular season, the postseason, the World Series and at parades. There is no question that he has been consistently good in a sport in which consistency is the most difficult skill to master.  He’s had a flair for the dramatic, and has been on some truly excellent teams. He’s clearly a leader on the field, and this in a market that, in his own words, can be “a tough, invasive, critical and demanding” place. And whenever I tune in on the radio or television, or when I get off the train at 161st Street and River Avenue in the Bronx, I’ve taken it for granted that Jeter will be there. Aside from his injury-plagued season last year, and the time he dislocated his shoulder in 2003, I could be fairly certain he would be in the lineup, even as that lineup has changed over the years he’s been in pinstripes.

I don’t know if Derek Jeter is a good guy.  I don’t really know if he’s as exemplary as we are led to believe he is. He’s extremely guarded about his personal life, and he’s carefully cultivated a squeaky-clean reputation with the press and with the public. Any public dust-ups he’s had have been minimal, but we hoi polloi rarely get to look behind the curtain to see who celebrities actually are when the cameras are off and no one is watching. And that’s fine.

When it comes to Jeter, I don’t care. Yes, it’s easier to root for a guy who isn’t a jerk (on the field, at least), who seems to really love to play the game, and plays it well. It’s easy to root for a guy who can be good at a game that takes just as much mental toughness as it does physical skill, who can be that good for that long, and, apparently, do so without the help of performance enhancing drugs. But Jeter’s mere presence in the lineup has been the thing I’ve enjoyed so much, and, like any reliable thing in my life, I’ve enjoyed it without even realizing it was there.

What I’ve loved about Jeter is that as my life has changed quite a bit since 1996, he has remained about the same, at least in terms of baseball. He may have lost some hair, had some public romantic relationships come and go, and changed managers and entire coaching staffs, but he’s been there in the Yankee lineup from April to October (and one November). There’s a certain comfort in that.

It will be strange when the Yankees finally and permanently trade him in for a different, less elegant, less expensive shortstop; one with fewer miles on his tires. I’m sure the new guy will be fine. But the new guy will be almost certainly less consistent and less reliable. Even if he’s not I will miss watching Jeter play. But for now, for this year at least, there’s still time to be grateful for his steady presence. He’s occupied that same place in my life for a long time, and next year I’ll miss that piece of good, well made, furniture.

The cover image is by Flickr user Keith Allison and can be found here.