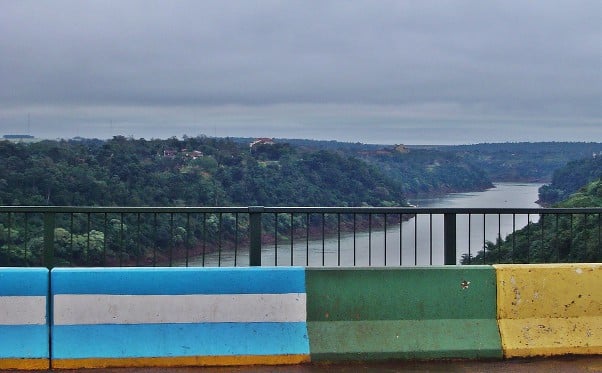 Maradona vs Pelé. Tango vs Samba. Iguazu vs Iguaçu. When it comes to rivalries, the greatest in the western hemisphere, if not the world, might very well be between Argentina and Brazil. Between Argentina and Brazil
(photo by seretide via Flickr)

So when it was announced that the new pope was an Argentine, organizers for this year’s Magis & World Youth Day 2013 gathering in Rio de Janeiro, Brazil, must have held their breath.  Would he even come to Brazil? Would Brazilians welcome him? Would they insist on a replay of their 1990 World Cup quarterfinal match up? Would he insist on an Argentine malbec with his Brazilian churrasco?

Well, breathe easy, everyone! We can put those fears to rest.  Zenit reports that, whether you’re speaking Spanish or Portuguese, Papa Francisco will attend World Youth Day, confirmed by none other than the president of the Brazilian bishops’ conference.

And as for rivalry, Brazilian Catholics are mostly rallying around the first pope. The Associated Press reports:

…[M]ost Brazilians said that it was great the new pope was Latin American, even if — gulp! — he’s coming from its biggest regional rival.

“We can’t question such a decision, even if we have a strong rivalry between Brazil and Argentina,” said Suelen Roos, a waitress at the Quincas cafe in Toledo. “This isn’t soccer, after all. We can’t think like soccer hooligans, we must think like good Christians.”

And whether Brazilian or Argentine, it’s the fact that he’s Latin American that unites, something worth celebrating across two continents:

“The people are going to be excited by the new pope. He appears to be a humble pope and asked the people for their blessing,” said (Rev. Antonio) DaSilva, a Brazilian who leads the largely Spanish-speaking congregation at St. Michael’s Church [Newark, New Jersey]. “As Latino Catholics, we are a humble people, a simple people.”

So where are you going to be this summer? There’s only one place where you can experience America’s two greatest rivals uniting together in one great moment: Magis and World Youth Day 2013, when Pope Francis comes to Rio de Janeiro to celebrate with the world’s young people! And if you’re there with us, I’ll bet you’ll see that the happiest among the many thousands will those from Argentina and Brazil, regardless of which fútbol club they support. (Pope Francis, it turns out, roots for local team San Lorenzo de Almagro.)