Individualism vs. Institutionalism in 2012 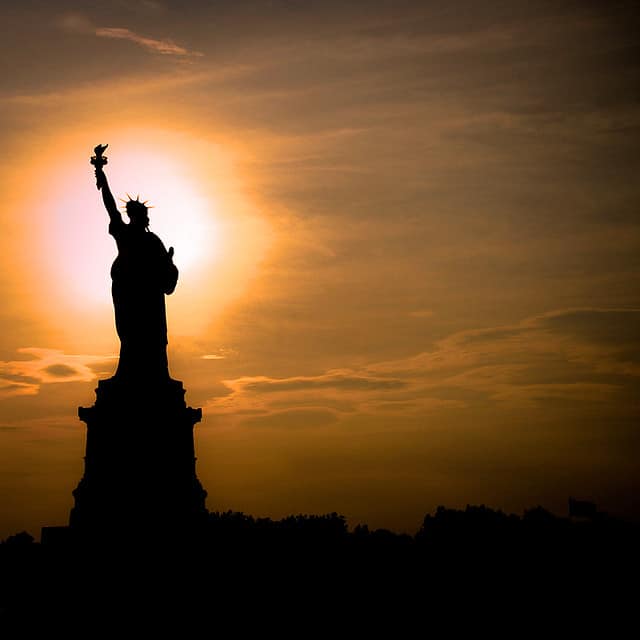 “If you’ve got a business – you didn’t build that. Somebody else made that happen.”

It will come as no surprise that these words, belonging as they do to President Barack Obama, are shaped by elaborate rhetorical flourishes.1 Flourishes aside, however, those words show President Obama arguing a standard liberal line: individual success is great, but no one becomes successful on their own.  The state (i.e., infrastructure – roads, schools, tax breaks) is also to be credited.  And since the state deserves credit, some of what is earned must in turn be given back to society. On the other end of the spectrum, the conservative rallying cry sounds out: if I didn’t build it, who the hell did?

A recent New York Times article by Peter Baker quotes author Robert Putnam, a Harvard University professor, who says, “America has historically swung between an emphasis on individualism and an emphasis on community.” He goes on: “It may not feel like we’re having this big philosophical debate, but underneath, I think that really is what’s at stake.”

Community vs. Individuality. Recognized or not, this is the debate we will see take place over and again on MSNBC and Fox News.  Hundreds of millions, perhaps over a billion, will be spend on it, and thousands of words strung together about it.  It is this debate that will cause voices to rise and fingers to point and brows to be mopped as the presidential campaign wrenches itself through another long summer. Already both Democrats and Republicans have filled our empty summer airwaves with arguments questioning the role and nature of government. You know them already: can the government do anything right? Ought the government force you to buy health insurance? Who built your business? How much can we cut, what do we cut, when do we cut it?  These questions, while they can lead to scintillating television, miss a larger point. In this discourse (if we can dignify it with such an honorific descriptor) what is often left out is the real issue, community or individuality.

So, what kind of communal society do we desire? And what is the role of government, if any, in realizing it? And how do we even begin talking about this?

Barack believes that government can be a force of change in our society. Mitt believes that the individual ought to be that force, and only if he or she desires that change. But, what kind of society do these men envision, and where does the government fit in that vision? You may think I am about to launch into a discussion of the Affordable Care Act. I am not. As tempted as I am, I actually think we will get a clearer sense of this debate if we look at something less polemical, something much more banal – food. The Ad – (c) The Center for Consumer Freedom

Earlier this summer, New York City mayor Michael Bloomberg proposed banning the sale of large soda drinks within the city. The rationale was to fight obesity. In response to Mayor Bloomberg’s proposition, a group called Consumer Freedom took out a full page ad in the New York Times entitled, “The Nanny: You only thought you lived in the land of the free.” Underneath the title was a picture of Bloomberg’s head attached to the body of a shapely older woman in a sky blue, knee length skirt. Off to the side of his/her bulging hips the ad says: “Bye Bye Venti – Nanny Bloomberg has taken his strange obsession with what you eat one step further. He now wants to make it illegal to serve ‘sugary drinks’ bigger than 16oz. What is next? Limits on the width of a pizza slice, size of a hamburger or amount of cream cheese on your bagel?” Underneath his/her ankles was the clincher – “New Yorkers need a Mayor, not a Nanny.”

The ad is devastating (if not somewhat alarmist and misogynistic) but I digress. Mayor Bloomberg’s plan to ban large sugary drinks has come under heavy fire and scathing critique from across the political spectrum. Attacks have come from those skeptical the plan will actually reduce obesity. Attacks have come from others who believe that this is a gross overstepping of the government’s role – like the government is an uninvited guest who shows up to your home one day and starts unpacking suitcases. There are even those who think the whole plan is just plain stupid. The Daily Show’s Jon Stewart participated in his own form of civil disobedience by slurping down a supersized soft drink during his show, sarcastically remarking all the while that Bloomberg’s order “combines the draconian government overreach people love with the probable lack of results they expect.”

In other words, regulate taxis, build roads, perpetually fix public schools, but do not try to regulate my Starbucks. Not a month later, I became aware that critics of SNAP (the Supplemental Nutrition Assistance Program more commonly known as food stamps) were calling for better regulation of the program. In other words, we need better regulation of what poor people eat because their eating of sugary and fatty food products produces obesity, places heavy burden on our health care system and fills the coffers of Coca-Cola, Pepsi, Mars and General Mills.

SNAP comprises 80 percent of the nearly $1 trillion farm bill passed by the Senate on June 21, 2012.2 As the recession has firmly entrenched itself, both the Bush and the Obama administrations have expanded the program to include many of the millions of Americans unable to properly feed themselves or their families due to job losses. According to the U.S. Department of Agriculture the number of Americans receiving SNAP is 21,072,113.  And growing. Congress is leading the charge to slash this program.  It’s an oddity that while poor people have higher than average rates of obesity, the Agriculture Department has observed that their diets are not much worse than the average American.

Now, in order to regulate what 21 million Americans eat, the government would need to set up parameters on what they can buy and maybe even track their purchases. We should rest assured that as of this summer the U.S. Department of Agriculture does not collect data on what people buy with food stamps. They do prohibit tobacco, alcohol, pet food and vitamins, but candy, soda, and ice cream are still allowed. So, it is still possible for you to pour your 12 ounce can of root beer into your 20 ounce bowl of chocolate ice cream, and sprinkle in the candy of your choice. If you receive SNAP, take every bite knowing that there are people who want the Department of Agriculture to track the sprinkles on your ice cream. If you are in New York make sure that soda is less than 20oz.

So this is where we stand: politicians and public policy analysts are trying to reduce obesity in the U.S. by limiting the choices of those who already have few choices: the very poor. If such initiatives were enacted we would live in a world where food stamp purchases would be controlled, where SNAP recipients would ideally be more healthy, albeit less free. This coupled with the overall ban on sugary substances of a certain size, and we are well on our way to reducing America’s waistline… as long as we are perfectly comfortable telling poor people what to eat in order to achieve a public interest—better public health by decreasing obesity among poor people.

Is Mayor Bloomberg on to something here? Will government intervention correct this obesity epidemic?
Do we want it to? Ah, that’s the issue.

The debate as described is provocative, isn’t it?  Mayor Bloomberg’s proposal is well intentioned, it might even work. It just skips over a few major, or to reference Peter Baker, a few philosophical, points:

All the questions shape how we look at the obesity debate.  Surely we prefer less obese people in this country than not, but do we desire it enough to allow the government to dictate whether or not we buy two 18-ounce cokes or one 20-ounce coke?  And conversely for poor people, should you be forced to have the government track your purchases if you take a government handout to feed your family? What is fair and balanced here?

It’s with these questions that one of the more vexing issues of our time – the role of government – comes into view. Because, on one hand, I am doubtful Mayor Bloomberg’s plan is at all wise. On the other hand, I do not believe the mayor is attempting to forge ahead with a police, better yet, nanny state. And on one hand, obesity is a major problem in this country. On the other hand, I do not think the government snooping into poor people’s eating habits best solves this problem. In other words: what is the relationship between the individual’s freedom to solve problems and the government’s ability to do so for the collective?3

I think that there is more common ground in this individual vs. institution debate than we might assume.  After all, most Americans would agree that big, expensive, and ineffective government bureaucracy is terribly unattractive. And most Americans would agree with Charles Krauthammer that there is something good about government when it resists reducing citizens to orphans in need of care by the government every stage of their life. Can a slightly ‘less than’ version of what we have now and a slightly more generous government than the one envisioned by many conservatives be a reasonable goal? Even better, do we have any models in our recent history for a strong yet limited, nimble yet effective government?  In fact we do.

75 years ago, President Franklin Delano Roosevelt gave his Second Inaugural Address. The specifics of his presidency might already be causing advocates of limited government to roll their eyes, but those specifics are not as important as the philosophical underpinnings that lead to those specifics. Just trust me for a second here.

In that Inaugural address Roosevelt uses religious language, “covenant” language, to talk about the Founding Father’s effort to create government through a constitution. We as a nation realize this covenant, he says, through a government which is able to unite people to solve “ever-rising problems in a complex civilization.” We turn to government, he says, because as individuals we did not have the capacity to confront and solve these problems on our own. Roosevelt was adamant that what followed the Revolutionary War was chaos: as individuals we could not address these increasingly complex problems. It was the Founding Fathers, then, who “…created a strong government with the powers of united action sufficient then and now to solve problems utterly beyond individual or local solution.”4

Roosevelt’s words describe a change in the moral tenor of American society. A society that has harnessed science and democracy can expect to better the lot of even its poorest citizens. In the midst of the Great Depression, in closing his second Inaugural address, Roosevelt asked a question that is again relevant in our time: “shall we call this the promised land? For each age is a dream that is dying, or one that is coming to birth… have we reached the goal of our vision. Have we reached our happy valley?”

It is again time to ask ourselves this question. Are we satisfied with where our democracy is going? Have we reached the goal of our vision? Have we reached our happy valley? I am not here to say that the government is the cure all, or some master magician who can wish our problems away. Perhaps, we can, for a little while, ponder how government can help us as individuals and collectively as society achieve the type of society we want. As Roosevelt said, we are not yet there. We have not fully arrived.
— — — — —