Virtues, Thrones, and Dominions! Oh My! 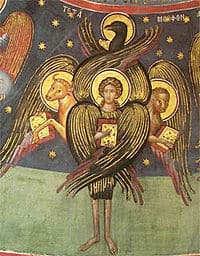 If you listened carefully to the new edition of the Roman Missal rolled out this Advent, you might remember hearing mention of a strange menagerie of heavenly creatures.

The Advent Prefaces to the Eucharistic Prayer—the part that begins “It is truly right and just” and ends with us all singing “Holy, Holy, Holy Lord God of hosts”—invoke the songs of Angels, Archangels, Thrones, Dominions, and Powers; other Prefaces throughout the year throw in Virtues and Seraphim for good measure.  But what exactly are all these heavenly gizmos the priest is inviting us to join in acclamation?

It is perhaps best to start by pointing out that in this context, thrones are not chairs sat upon by kings; dominions are not regal estates; and virtues have nothing to do with the established habits of decent human beings.  All of these words refer to types of angels mentioned in Sacred Scripture.

Now I am no expert in either angelology – though I do like saying the word – or Biblical studies, but you don’t have to be a specialist to notice how thoroughly permeated with spiritual beings the world of the Bible is.  We tend to gloss over mention of the heavenly hierarchies these days, not talking about them much because of how foreign the notion of angels is to our own worldview.  And we don’t talk about thrones and dominions because, well, we don’t even know how to talk about them.

A few years ago I took a class on the Book of Revelation, and on the first day, the professor asked us why the sun rose every morning.  Since everyone seemed a bit bashful that first day – and probably sensed the trap in the question – I raised my hand and said something about gravity and the earth’s orbit and quarks and other things of that sort.  (I often find it useful to mention quarks in such situations because they sound very up-to-the-minute and scientific, and I’ve found that theologians often want desperately to be both of those things – so desperately, in fact, that they fail to notice that I don’t know what I’m talking about.  But I digress.)  In this case, however, the professor simply said, “You’re wrong.  It’s the angels that do it.”

He wasn’t actually arguing with me, I understood, merely trying to demonstrate how differently the first readers of the Book of Revelation would have thought about the universe.  Understanding the Book of Revelation – or any of the books of Scripture – requires an imaginative leap on our part, an attempt to see the world as people very different from we ourselves saw it.

Such an effort need not, of course, mean that we begin to see angels tugging manfully at ropes of sunshine every morning at the dawn, but it might require the interrogation of some of our own unconsidered cultural assumptions.  Could it be that there is more to life than quarks and gravity?  Or must we simply take on faith that only what we see – or can build big instruments to detect – is real?  Have we fallen into a trap of inductive reasoning that says, “So much knowledge can be found on Wikipedia these days; if something can’t be found in Wikipedia, it must not really exist”?

And then again, even if we are inclined to believe in angels, what are we supposed to make of the seraphs and virtues and thrones?  Do the kinds and categories of angels really matter all that much?  Should I hope to have a dominion as my guardian instead of a puny little cherub?

I did a bit of research into the subject, even cracking open the Summa Theologica of Thomas Aquinas, but I’m afraid to say I’m still not able to diagram for you, dear reader, a guide to the heavenly hosts.  Aquinas devotes well over a hundred densely printed pages to the bodiless creatures, and the angelic doctor, I’m also afraid to admit, can be a bit of a dry read at times.  What’s worse, I realized as I read that if I really wanted to get to the bottom of angelology – instead of just enjoying the roll of the word on my tongue – I’d have to dig into the Church Father Pseudo-Dionysius, not to mention the Book of Enoch and other writings from the time of Christ which didn’t make it into the Bible but are frequently quoted by the Biblical authors. Nonetheless, even my cursory skimming of Aquinas’s tome left me with the conviction that angelology has a thing or two to teach us (post)moderns.  The saintly theologian’s treatment of such questions as what the angels know and how the demons fell allows a particular picture of the universe to unfold, and many of the answers Aquinas gives have implications for us decidedly more earthbound creatures.  We Americans, for example, with our rugged individualism and our myth of the self-made man, would do well to note Aquinas’ observation that even the angels need grace.  And in attempting to follow the sometimes maze-like pathways of the moral life, the story of the fall of the angels through pride tells us much about how temptation operates in our own lives.

What is most striking to me in Aquinas’ thought, however, is something not quite as explicit, something just below the surface, almost hidden by the dryness of his methodical prose: the dazzling diversity of his universe and what that diversity tells us about its Creator.

In the new translation of the Nicene Creed we acknowledge the Father as Creator of “all things visible and invisible,” a somewhat more precise phrase than the old “seen and unseen.”  The books sitting on the shelf behind me are unseen but by no means invisible.  Angels, on the other hand, are invisible; they aren’t seen because they aren’t the sort of thing that can be seen.  Many things – from the profound, like love itself, to the mundane, like radio waves – are likewise invisible.

Thanks to the scientific method, we moderns have established an impressive mastery over things visible, doing everything from putting a man on the moon to killing cancer cells with radiation.  But what the words of the Roman Missal, the Biblical worldview, and the vision of a philosopher like Thomas Aquinas all suggest is that there is more to life than those things over which we have mastery.  This universe contains layers of being – and layers of meaning – we cannot even begin to comprehend.

In his fine new documentary series Catholicism, Fr. Robert Barron several times repeats the words of Hamlet to Horatio, “There are more things in heaven and earth, Horatio, than are dreamt of in your philosophy.”  Shakespeare’s words here express a sensibility fundamental to a Catholic worldview.  Call it wonder if you will, or intellectual humility, or awe.

The world around us, the world we apprehend with our senses, is the first word the Creator speaks to us about himself.  At one point Aquinas asks why there are so many different species of things in creation.  His answer is that all the layers and species and levels of things, each with its own unique perfections, reveal the perfection of their Creator, just as a prism separates light into colors of the spectrum we otherwise couldn’t see at all.

All those names of angelic beings – thrones and virtues and seraphs and powers – each distinguished, according to Aquinas, according to its offices and actions, “show” God in just the same way as a prism shows us the colors within ordinary light.  We might not need to remember which being performs which task, but it is worth remembering that divine revelation, in our Scripture, in our liturgy, in the thought of our most profound theologians, teaches us that there are spectrums that we cannot see (and spectrums within those spectrums, too).  Seeing the world as a Catholic means remembering that we walk among these spectrums, toward a light richer and more dazzling than the flimsy shadows others imagine reality to be.

tlusvardisj@thejesuitpost.org   /   All posts by Tony