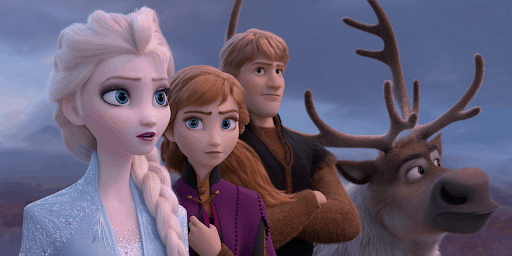 Last week, Frozen 2 hit the big screen. The story takes place three years after the original tale, which means the characters are more mature. Elsa has come to accept her powers and Anna is not the lovestruck teenager she was in the original film.  Because of this new maturity, the characters can wrestle with bigger issues than they could before.

While one of the themes of the original Frozen was the search for one’s identity, this sequel looks at how we grapple with the fact that we are part of family and social identities as well. These identities are loaded with histories over which we have little to no control. The good and the bad are passed onto us from our parents, and it is up to us to learn and grow from confronting and accepting these histories.

The conflict of the story begins when magical entities begin to disrupt life in Arendelle.  As the queen of Arendelle, Elsa feels a responsibility to protect her subjects. And though she wants to go at her quest alone, since it was her powers that awakened the spirits, she accepts the help of her sister Anna, as well as Olaf, Kristoff and his reindeer companion, Sven.

The group enters an enchanted forest and recalls the conflict between the people of Arendelle and those of Northuldra.  Elsa and Anna are the granddaughters of the king at the time of the conflict. They also learn that their mother is Northuldran and feel obligated to figure out what happened between the two peoples.  Their search for truth forces them to confront the complicated history of the two kingdoms. Eventually, they learn the cause of the conflict. Their supposedly peaceful grandfather was the one that plotted the defeat of the Northuldrans.  That is a difficult reality that Anna and Elsa are called to accept.

In a similar vein, we can often attempt to ignore those parts of our past (whether personal, familial, or societal) that are painful and complicated.  Each of us has the baggage of a complicated past, and we have to face the imperfections of our personal histories. That could be as simple as realizing that someone we admired is flawed or that we, as a people, are not always as good as we can be tempted to claim.

As difficult as those realizations are, we can take solace in the lesson the characters in Frozen 2 learn when they confront similar realizations.  They are not alone, and neither are we. At our best, we have family, friends, and communities who accept us in our flaws and difficulties. This sort of authentic love helps us practice transparency in seeking help from this support network. It also helps reminds us to have compassion for those face similar struggles.

We cannot begin to make amends for the sins of our past (whether personal or collective) by ourselves.  The support of others helps us confront reality and make substantial and necessary changes.

Even with the support of others, these moments can be easy to deny we need to face them, not with violence but with love. For example, Elsa does not subdue the elemental spirits with force but rather with compassion.  She interacts with them in a spirit of friendship, without the need for domination or violence. When she finds the source of the fire spirit, a fragile salamander, she does not crush it but instead recognizes that it was scared.  Elsa welcomes it as she continues to search for the truth. Later, she even works in tandem with the water spirit to save Arendelle from a massive surge of water.

We have something to learn from this Disney princess who chooses compassion over domination, vulnerability over violence, and transparency over denial of the truth. In doing so, she becomes the guardian of the enchanted forest, healing her community from the harm of past sins committed by her family.