There are two reasons why it was appropriate to celebrate my 30th birthday by watching the latest Power Rangers film: 1) this film is targeted towards an audience in its late-20s/early-30s nostalgic for the superhero group that defines our generation and, more importantly, 2) my 10th birthday party centered around watching the previous Power Rangers movie in theaters. At the threshold of my 30s, this seemed like an easy way to hold on to being a kid just for two hours longer. As a fan, who had his misgivings about this reboot, I had expectations about what it should be – what it needed to be.1  I was not alone in this: some critics also reviewed the film with their own expectations.2 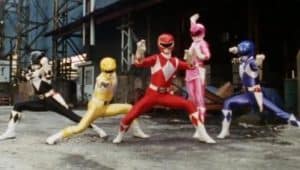 This is a shame. Going into this movie with expectations compels viewers to look for specific lines, tributes and homages and to reconnect with all-too-familiar characters. Stuck in the past, they’re cheated out of encountering a group of strangers for the first time.  They miss out on new, diverse characters with greater depth than we knew they could have.

[Spoiler alert: the following content contains details about plot elements in the film]

Originally, there was one trait that all the Power Rangers shared — shallow characterization.3 But these five don’t even share that.  There’s a teen with autism whose curiosity and inventiveness landed him in detention; a bad boy who is over-confident about everything he does; a mysterious girl who likes to do things by herself, on her own terms; an ex-cheerleader who landed in detention after knocking out a guy’s tooth with a punch; and a star-athlete who is under police tracking after a prank went wrong.

Yet, if they want to morph into the Power Rangers, they need to find a way to work together.  And working together is impossible, unless they really know each other as human beings with unique life experiences and stories instead of through prejudicial judgments … or predetermined expectations.

In the world of high school, why would anyone want to talk to any of them? The five of them didn’t even want to talk to each other. Finally, one night gathered around a rock-quarry campfire,4 Zack suggests that they each share their life stories. The others pick up on the cue of vulnerability and lower their defenses. Billy the Blue Ranger explains that he doesn’t view his autism as something that holds him back, but something that has allowed him to hold on to memories of quality time spent with his now-deceased father. Zack the Black Ranger, confident though he may appear, reveals that he lives in a trailer park with his dying mother and is afraid to spend too much time away from her lest she dies alone. Trini the Yellow Ranger discloses that she is always by herself because her family doesn’t understanding her struggle with her sexuality. It’s this getting to know one another as people with stories that shears away prepackaged judgements or faceless ideas about others.  Stereotypes turn into human beings with whom one can have a connection.

Just after Billy, Zack, and Trini share their stories, Kimberly, the Pink Ranger, tells them she doesn’t want to share hers. Later that night, she breaks into Red-Ranger Jason’s trophy-filled bedroom for a heart-to-heart. She confesses that a friend of hers sent her a private picture, which Kimberly subsequently texted to other people. When a mutual friend had pointed out that Kimberly was “the meanest person ever” for doing what she did, Kimberly punched him in the face, knocking out a tooth. She regrets how deeply she betrayed and hurt her close (ex-)friends and just wants to escape the horrible person she thinks she has become. Jason, fulfilling the star-athlete who also genuinely cares about others role, reminds her that she needs to forgive herself. She fires back that she cannot undo her mistake. He replies that she cannot let her past action define who she is.

Jason might be channeling Pope Francis.  To the Pope, we are all  “lowly yet chosen.”  Though all of us are sinners, God has called each of us to follow Him. Kimberly, like the other four, is broken and recognizes that she should not have passed on that picture. However, sinful and all, she was among the chosen five. Their youth/weakness5 and their imprudent life choices do not alter the fact that they have what it takes to be the Power Rangers. And in this way, they’re just like us — our weakness in our struggles with sin do not mitigate the fact that we are children of God. Weakness is a fact of our lives, but it’s not something to run from. In fact, it is through our struggles that we ought to recognize more clearly our limitations and to ask God to strengthen us.6 It is a reminder that only through God’s mercy that we find strength to be the child of God that we are each made to be.

Papal inspiration notwithstanding, is the film perfect? Nobody (and I mean nobody)7 is saying anything remotely of that nature. It is definitely a product of its time, unfortunately loaded with crude humor, innuendo, and in-your-face product placement. However, it is also fortunately a product of its time, bringing into focus the increasing isolation and breakdown of community especially due to snap judgments and often-false narratives and over-generalizations about groups of people. We see this play out in our own culture in terms of sex, ethnicity, place of origin, religion, socio-economic background, sexual orientation, political affiliation, educational attainment, physical ability, stage of life, etc. We also live in a time when it is hard to admit fault and ask for forgiveness, because we equate people with their actions so that making bad choices somehow means being a bad person. If we admit to our faults or limitations, we expect others to judge us negatively. After all, that is what we tend to do to others (and ourselves) and what critics tended to do to this film.

Judgment has the power to condemn. A 38% rating8 on Rotten Tomatoes can deter people from watching a film just as easily as not questioning one’s own prejudices can deter someone from getting to know the strangers in her or his life. If people expect this to be another superhero movie, they will find that it is underwhelming.  There’s less here than in a Marvel or DC film.9 Power Rangers can be cast aside for another franchise. However, if the movie speaks for itself, free from pre-judgement, it can have shortcomings and still invite fans to enter into a journey of how five teenagers-with-attitude encountered each other with open minds.  The Power Rangers discovered that in the midst of seeming isolation, a community was waiting for them to form and live together.

Who would have expected that?