When Canaries Can’t Breathe: Sotomayor’s Justice from Below 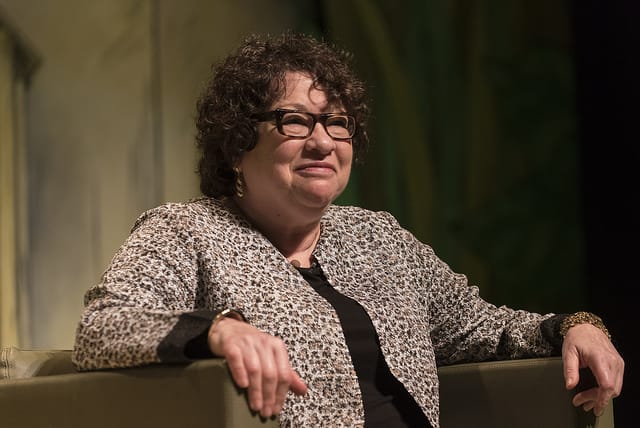 “The life of the law has not been logic; it has been experience.”  So wrote Supreme Court Justice Oliver Wendell Holmes, Jr. in his magisterial treatment, The Common Law, nearly 140 years ago.   More and more, it becomes apparent that so much of our legal system — our justice system — reflects not (simply) abstract norms of perfection, but, rather, concrete and messy realities.

The best example of the law’s life in experience on the Supreme Court now is the developing jurisprudence of Justice Sonia Sotomayor, particularly in dissent, and with a particular focus on criminal justice. Hers is a jurisprudence, as Adam Liptak noted in the New York Times, “informed as much by events in Ferguson, Mo., in 2014 as by those in Philadelphia in 1787.”

To see this jurisprudence in action, we need look no further than her dissenting opinion in the case of Utah v. Strieff, No. 14-1373 579 U.S. ___ (June 20, 2016).  Here, the Court divided 5-3 on the question of whether prosecutors could use evidence seized after an illegal stop, where a valid arrest warrant also existed that was unrelated to the illegal stop.  The majority held that the warrant was an independent variable that legitimated the seizure, even though law enforcement had no basis to stop the defendant.  Arrest warrants are often issued for relatively minor offenses, moreover minority communities are disproportionately subjected to such warrants and police supervision. These facts only add to the disquieting reality of violence at the hands of law enforcement in those communities.  Unfortunately, these concerns were downplayed by the majority.

Justice Sotomayor, in dissent, rejected this out of hand.  She engaged with the reality on the ground, relying on the findings of the Department of Justice reports on Ferguson, as well as the research of Michelle Alexander reported in The New Jim Crow, and the Court’s own precedents on police stops and criminal justice.  She focused on the implications from all of these sources to try and grapple with the actual reality of how police stops impact the American people.  This section (beginning on page 22 of the Court’s slip opinion), is short and readable, and is worth reading in full:  Justice Sotomayor is clear that a police stop is a powerful, dramatic, and possibly devastating assertion of state-sanctioned power over an individual. The indignity of the stop is not limited to an officer telling you that you look like a criminal…The officer may next ask for your “consent” to inspect your bag or purse without telling you that you can decline… Regardless of your answer, he may order you to stand “helpless, perhaps facing a wall with [your] hands raised.”…If the officer thinks you might be dangerous, he may then “frisk” you for weapons. This involves more than just a pat down. As onlookers pass by, the officer may “‘feel with sensitive fingers every portion of [your] body. A thorough search [may] be made of [your] arms and armpits, waistline and back, the groin and area about the testicles, and entire surface of the legs down to the feet.’”…

The officer’s control over you does not end with the stop. If the officer chooses, he may handcuff you and take you to jail for doing nothing more than speeding, jaywalking, or “driving [your] pickup truck . . . with [your] 3-year-old son and 5-year-old daughter . . . without [your] seatbelt fastened.” … At the jail, he can fingerprint you, swab DNA from the inside of your mouth, and force you to “shower with a delousing agent” while you “lift [your] tongue, hold out [your] arms, turn around, and lift [your] genitals.”… Even if you are innocent, you will now join the 65 million Americans with an arrest record and experience the “civil death” of discrimination by employers, landlords, and whoever else conducts a background check… And, of course, if you fail to pay bail or appear for court, a judge will issue a warrant to render you “arrestable on sight” in the future. Utah v. Strieff, 579 U.S. ___, Slip Op. at 23-24 (Sotomayor, J., dissenting) (citations omitted).

This reflects, undoubtedly, the experiences not only of those who have appeared in the social science literature and the various court cases she has encountered, but Justice Sotomayor’s own experiences as well.  She is the only current Supreme Court justice to have practiced in the area of criminal law before becoming a judge.  And, as she acknowledged during a hearing last year, she has been stopped by the police, and she found the experience infuriating.1  One commentator noted that this put Justice Sotomayor in the opposite position of Chief Justice John Roberts, who seemed to imply that he had never actually been stopped by the police.

This matters because what the Supreme Court — or Congress, or the President, or state and local legislatures, executives, and judges — say in the abstract has real-world consequences.  If law enforcement, for example, knows that a pre-existing arrest warrant will immunize unlawful stops, then they have that much less incentive to avoid unlawfully stopping individuals, especially in those communities already disproportionately subject to arrest warrants.  Concern about such behavior is not fear-mongering or idle speculation, it is already the reality. Justice Sotomayor notes that there are nearly 7.8 million outstanding arrest warrants in the United States.  Some are undoubtedly for criminal activity; many, though, are the result of minor infractions or civil violations, such as a missed court date, failure to pay a traffic ticket, or other fines.

These are not, as she mentions time and again, isolated.  They are systemic.  In some communities, such as Ferguson, nearly 80% of the community has been subject to an arrest warrant.  Moreover, law enforcement personnel are often advised to stop without cause and to run warrant checks, precisely to find some post-hoc immunization of the type the Court now justifies.2  Several New York Police Department officers admitted as much recently, stating that a focus on measurable metrics leads to over-policing and victimization of politically weak and socially marginalized groups.   To ignore this reality by claiming it is “isolated” or that the worst versions of what will happen is “unlikely”, as the Court seems to do, is frustrating for Sotomayor. In many ways, Justice Sotomayor embodies the best of the Catholic legal tradition.  To the degree we are called to a preferential option for the poor — an option that calls us to work for justice and to be in solidarity with the poor — then we are required to acknowledge and admit the impact of our social policies upon the poor, the marginalized, and communities excluded from access.  St. John Paul II reminded us of this in his encyclical Centesimus Annus.  John Paul II writes that we are called to stand in solidarity not only with the materially poor, but with all marginalized and excluded communities (§ 57). In such solidarity justice is manifest, “helping entire peoples which are presently excluded or marginalized to enter into the sphere of economic and human development” (§ 58).

This is precisely what Justice Sotomayor asks of her colleagues on the Court, as well as of us, particularly those of us engaged in the legal profession.  She calls us to honestly face the indignities our criminal justice system imposes upon those brought into its orbit. She invites us to begin our legal discussion from a place of solidarity. Such a truly Catholic approach, aids us in understanding the deep reality of what we do, so that we might honestly grapple with the policies we adopt, enact, and enforce.  For those of us who work in the legal field, this invitation is ever-more pressing.  Legal rules and systems do not exist in a vacuum.  Rather, they are made real in real life.  When we fail to recognize this, we fail to see how we use and abuse the power that comes from being, as we say, officers of the court.  We must be aware of how we live out this power.  We must be responsible for it.  As Justice Sotomayor says:

We must not pretend that the countless people who are routinely targeted by police are “isolated.” They are the canaries in the coal mine whose deaths, civil and literal, warn us that no one can breathe in this atmosphere. See L. Guinier & G. Torres, The Miner’s Canary 274–283 (2002). They are the ones who recognize that unlawful police stops corrode all our civil liberties and threaten all our lives. Until their voices matter too, our justice system will continue to be anything but.  Strieff, Slip Op. at 25 (Sotomayor, J., dissenting).