Last month, our colleagues at America published a detailed account of the economic challenges facing adjunct college professors. These difficulties include lack of health insurance, inadequate pay, and job insecurity. On a national scale, a study from UC Berkeley reported that 25% of all adjunct faculty rely upon public assistance to make ends meet. To fight for greater rights, many adjunct professors have begun seeking union representation. These unionization drives include Jesuit schools like Loyola University Chicago (LUC), where non-tenure-track faculty recently voted to join the Service Employees International Union (SEIU).

Since the initial faculty petition for union representation, the administration at Loyola Chicago has questioned and challenged unionization efforts. The president’s office released various statements voicing opposition. Some of these stated a desire to dialogue directly with workers rather than through a union. Other university officials stated that because LUC is a religiously-affiliated school, they fell outside the jurisdiction of the National Labor Relations Board (NLRB). The NLRB disagreed. After the official union vote on January 27, the university voiced disappointment that faculty would only be represented by SEIU, and not be able to choose which union represented them. 1

These responses from the university have drawn criticism from many (myself included). The treatment and compensation of contingent faculty members is, of course, a social justice question – and Catholic Social Teaching (CST) has long supported the right of workers to unionize. It’s also worth noting that Loyola is probably not trying to line its pockets, but instead trying to keep costs low for students. This, too, is a question of justice – and one of ensuring access for those students in need of financial support.

Still, I hope that amid the complexities of contemporary higher education in America, Loyola will rediscover its roots in CST. More to the point, it is important for Loyola to rediscover and engage part of its Jesuit History: a strong and deep relationship with the American worker. The time has come for a Throwback Thursday about that history and mission.

American Jesuits, especially in the Midwest, have a rich history of supporting labor. Well before Pedro Arrupe’s famous “Men for Others” speech about educating for justice, the Jesuits in St. Louis did amazing and creative things to support workers.2

For example, in 1921, the Midwest Jesuits started a radio station to communicate crop prices to farmers. The station helped farmers get information on these prices quickly, allowing them to demand better payment for their work. The station later broadcast education programs on the social encyclicals, the texts that articulate the tenets of Catholic Social Teaching. St. Louis University published books and pamphlets on the rights of workers – and on the responsibilities of employers. The campus parish, St. Francis Xavier, offered worker retreats and provided a venue for worker organizing and education.

Later, in the 1940s, the Jesuit parish on the North Side started a chicken cooperative to secure food for African American families. Families made an initial small investment and put in work at the cooperative, then received eggs and meat at drastically reduced costs. The Jesuits of St. Louis ran an incredible number of worker-oriented ministries. From miners to metallurgists, the whole Missouri Province (which, at the time, included Chicago – and Loyola University) engaged in this work.

One of the great stalwarts in support of worker justice was Leo Brown. A Jesuit priest, Brown earned his doctorate in Labor Economics at Harvard University. Shortly thereafter, he began working as a labor arbitrator for the National Labor Relations Board – adjudicating labor disputes between workers and employers. In all, he arbitrated over 3,500 cases. 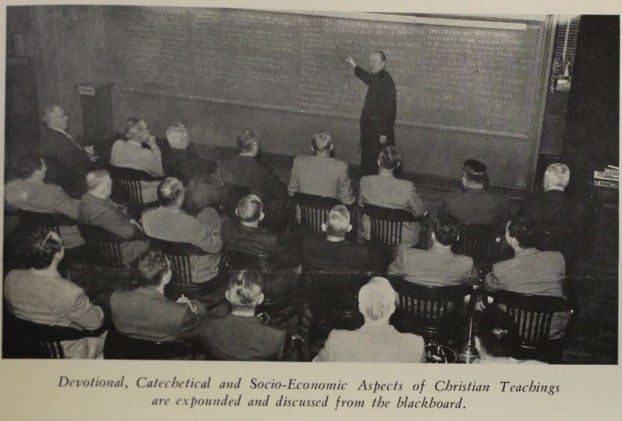 While working as an arbitrator, Brown also taught at the St. Louis University Labor College. The school taught collective bargaining, labor law, parliamentary procedure, and mediation. The SLU Labor College offered most of its classes at night to ensure workers could attend. In this context, worker-students learned about the social structures that created and perpetuated the injustices they faced – and also learned about Catholic approaches for fighting the same.

To be fair, Loyola Chicago stands on the forefront on many social justice endeavors. We might note here the decision to accept and support undocumented students made by Loyola’s Stritch School of Medicine. Even its undergraduate student body also recently voted to increase their own fees in order to support scholarships for undocumented students. Sensing the urgent ecological crises facing our planet, Loyola has also pioneered education for sustainability.

This last year, Loyola University Chicago sponsored a new and creative venture – Arrupe College. Named for Pedro Arrupe, the school is “a two-year college for motivated students with limited financial resources and an interest in transferring to a four-year institution after graduation.” Right now, the school is small, educating under 200 students. Arrupe College offers associates degrees in Arts & Humanities, Business, and Social & Behavioral Sciences. Perhaps, one day, it could model a new/old kind of Jesuit education and offer associate’s degrees in skilled professions, accompanied by training in Catholic social doctrine and labor organizing.

In light of initiatives like these, Loyola’s stance on faculty unionization seems jarring. Given all of these positive steps, why not support labor justice as well?

Georgetown University has already helped pave the way. The Kalmanovitz Initiative for Labor and the Working Poor provides research and community organizing for the working poor. The Initiative has already begun urging Jesuit colleges toward its Just Employment Project model. LUC can take these efforts and run with them.

Imagine if instead of pushing back against unions out of hesitation, Loyola Chicago collaborated with local workers and unions to provide training, education, and community outreach. Imagine if Loyola Chicago set the standard for workers rights, building on its other commitments to justice in higher education.

Loyola Chicago – and other Jesuit, Catholic institutions of higher learning – have a great opportunity before them. It is an opportunity to connect more deeply with their Catholic mission and their Jesuit history of standing on the forefront of labor rights. But this opportunity requires definitive choices: first, to see contingent faculty as partners in mission who should be fairly compensated. And, following on that, it requires choosing to treat adjunct faculty with the dignity they deserve – including recognizing their right to unionize.

The cover image, used by permission of photographer Joe Piette, is accessible via Flickr.