A few weeks back, we heard of Papa Francesco’s escape from the confines of Vatican City to pay a visit to — of all places — his opticians. The tourists and journalists went wild, and the world applauded another instance of this humble Holy Father who loves to do the ordinary things in life. What struck me as particularly poignant, though, was his insistence that the optician only replace the lenses; he wanted to keep the frames.  Why?  Presumably because there was nothing wrong with them; they were well made, he had chosen them carefully, and rather liked them.  In other words, he eschews the type of anxious consumerism that Laudato Si identifies as leading people to “get caught up in a whirlwind of needless buying and spending” [203].

At this juncture I should make a small confession.  I love consuming.  My commendable inquisitive nature is matched by my less virtuous acquisitive habits.  And on a recent trip to the Italian city of Milan, I was reminded that I belong to a rare breed of contemporary Jesuit.  I am fascinated by the world of fashion.

Perhaps it’s in my blood.  I hail from a long line of Yorkshire textile manufacturers.  One of my sisters is a costume designer, and other family members are fashion buyers and stylists.  A cherished memory of my first week at university is being awarded the prize for Best Dressed Fresher.  So, whilst most of my Jesuit brothers are admirably practical about their wardrobe — “Is it waterproof?” “Can it withstand the tumble-drier?” — I am much more interested in its cut, and how it looks.

Of course, embracing my vocation to the Society of Jesus has curtailed opportunities to pursue this particularly materialistic interest.  And quite rightly too: Lady Poverty cannot share a stage with Mssrs. Armani and Gucci.  When I told a friend about my 400-mile begging pilgrimage across Spain during the novitiate years, she quipped: “Gosh, it’s like you’ve gone from Prada to Nada.”  Smiling, I replied “Yeah, well…sort of.”  Let me expand.

Like it or not, what we wear says a lot about us.  Reflecting a desire for his new religious order to be “this least congregation”, St. Ignatius stipulated that a Jesuit’s clothing should not attract too much attention.  So, instead of prescribing a distinctive habit, the Jesuits’ governing document (the Constitutions) merely states that a Jesuit should dress modestly, and in a way that reflects the local context.  Applying the first of these principles, the Jesuit Superior General became known as the Black Pope because he wore a plain black soutane.  Meanwhile, interpreting Ignatius’s second principle, various early Jesuits saw the missionary potential of their garb.  Hence Matteo Ricci dressed as a Confucian mandarin and Roberto de Nobili adopted the garb of an Indian Sadhu.

In his own way, our own Jesuit Pope Francis recognises the symbolic power of what he does — and doesn’t — wear. To be clear: I’m not interested here in re-hashing glib jokes about ermine fur and red slippers. That attire simply is not Francis’s style, and he would be the first to admit it. Being a typical Jesuit, His Holiness is not as naturally sartorially chic as some of his predecessors.  But that is not to say he does not care about the things he wears, as his trip to the Roman opticians clearly demonstrated.

Francis’s encyclical Laudato Si has lots of practical things to say about how we can modify our consumerist lifestyles.  At its heart is justice, and for this reason it quotes Benedict XVI’s insight that “Purchasing is always a moral – and not simply economic – act” [Caritas in Veritate, 66]. In the context of fashion, behind our compulsive lust for new clothes lies a world of overseas sweatshops.  The biggest fashion crime is not last year’s t-shirt the stores want you to replace with one from their latest collection, but the garment’s human and ecological footprint. To develop William Blake’s apocalyptic metaphor (popularised by the anthem Jerusalem sung at England rugby matches), our dark satanic mills have been outsourced to sweatshops in countries like China and Bangladesh.  In other words, the labor and environmental cost of our clothing is often borne by those in the developing world.

Another confession.  A few years into my Jesuit life, I noticed that whilst my wardrobe was significantly pared down, even on a very limited budget I could still afford a number of items from high street stores, which were not altogether unfashionable. The problem was that they became outmoded pretty quickly — and that was only if they lasted long enough to go out of style.  Generally they were poorly made and rapidly fell apart. I had unwittingly entered the world of fast fashion. 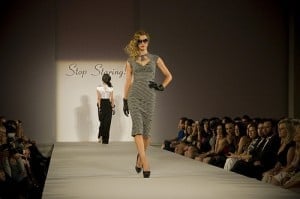 Fashion: at what price?

A turning point came to me reading To Die For: Is Fashion Wearing Out the World? by the UK fashion journalist Lucy Siegle. Siegle painstakingly charts how the fashion industry has cleverly manipulated our shopping habits in the past 15 years, replacing the traditional two seasons Spring/Summer and Fall/Winter with 52 “micro-seasons” per year. The result? A huge explosion in the amount of clothing produced.  According to the US journalist Elizabeth Cline, Americans purchase nearly 20 billion garments a year.

Stop for a second to let that figure sink in: 20,000,000,000 garments for 319 million people.  That’s roughly 63 articles per person, per year. Cline also notes that the average American gets rid of 10 lbs of clothing, each year.

I often think life was simpler for Jesuits when cassocks were our de rigueur habit.  But is there a way out of this vicious cycle without imagining that the Nada option is the only viable alternative for those taking ecological conversion seriously? I don’t believe the vision of Laudato Si boils down to a binary acquire-or-renounce (“Prada to Nada”) solution. It’s more a question of engaging with the spirits of discernment when we do our shopping.  Here are perhaps a few golden rules that could guide us:

As Siegle’s analysis shows, we are often cajoled into buying stuff we don’t need. The emergence of fast fashion has transformed our attitude towards clothes.  We “consume” clothes in the same way we consume food.  But this has not made us happier.  In fact, quite the opposite. Siegle identifies fashion anxiety: “Despite your fat wardrobes and hard-to-shut drawers, philosophically speaking you won’t be very happy with what you’ve got.”  As Laudato Si explains, “a constant flood of new consumer goods can baffle the heart and prevent us from cherishing each thing and each moment” [222].

2) Buy more carefully and be prepared to repair

Because fast fashion is relatively cheap, little discernment is employed when purchasing items. Compare this to my grandmother, for whom buying something as basic as a pair of stockings was an exercise carried out with great diligence. A relationship was built up with the product, which extended to a duty to repair.  But how many people darn their socks these days? (“darn it” meant “sew it up” long before it was a mild epithet). Admittedly I wouldn’t have a clue where to begin!  Yet there are many occasions when, even drawing on my elementary sewing skills learnt as a cub scout, I could mend some items rather than simply chucking them out.

3) Buy with a conscience and do your research

This is perhaps the most complicated of the principles to apply, but I am convinced that Laudato Si calls on us to become advocates for the poorest through individual and collective purchasing powers.  Siegle reports on how textile factories in developing countries are under immense pressure to react urgently to any change in trend. Manufacturing cycles are constrained into days and hours (rather than weeks, as was done previously), with terrible consequences for workers’ conditions. Furthermore, sourcing the required raw materials is wreaking havoc on ecosystems. Cotton production uses enormous quantities of water, and leather tanning is literally poisoning the River Ganges.  Some products, brands and companies have a better track record on these issues than others.  As discerning consumers, keep your eyes and ears open for the worst offenders, and boycott, lobby, and campaign as appropriate.

Laudato Si does not propose easy solutions. But the encyclical, together with Pope Francis’ recent apostolic visit to the opticians might point us in the right direction: Buy less stuff, less often. And when you do need something new, buy something of good quality that you can repair, if possible.  Find out as much as you can how something ended up on the clothing rack.  It’s not a case of Prada or Nada — but a very Catholic, “something in between.”