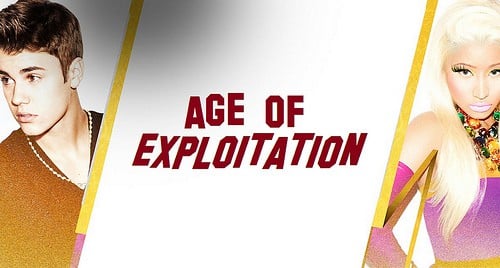 I know we’ve only met but let’s pretend it’s love.

Tonight let’s get some.

I got some down bitches I can call

I don’t know what I would do without y’all

I’mma ball till the day I fall… Earlier last month, NPR’s Ann Powers posted a critical commentary on American pop culture’s effort to blur the lines between “a playful risk and real one, or even between violation and fun.” She sifts through this summer’s  top-of-the charts songs such as Robin Thicke’s “Blurred Lines,” Miley Cyrus’ “We Can’t Stop,” Usher’s (ft. Rhianna) “Come and Get It,” and even everyone’s favorite, Carly Rae Jepsen’s “Call Me Maybe,” just to name a few, questioning the motives behind the fantasy worlds that pop stars create.  Overall, Powers finds the positive messages–of finding self-worth in carefree and careless explorations–in today’s pop music and music videos dubious, and though her post hasn’t stopped me from listening to some of these catchy tunes, I do find myself looking more closely at the faces of the guests whom I allow to roam freely into the most intimate chambers of my mind that contain the delicate seedbeds of imagination.

“The blurred messages Thicke, Cyrus and others are now sending,” Powers holds, “fit a time when people think of themselves as products, more than ever before.”  This is an insightful point.  Indeed, when the imagination has convinced the heart that it is just a piece of meat, how can it genuinely oppose exploitation?  What does it mean to take delight in objectification, doping, manipulation, domination, possession, you name it, as we find them in the realm of virtual reality, and yet give an appearance of opposition in actual reality? 1

Music, and art in general (good and bad), feeds the imagination with possibilities and can at times charge the imaginator with the motivation to make these possibilities real. In other words, we can become what we frequently imagine.  Great spiritual masters, St. Ignatius of Loyola included, have certainly understood the imagination’s influence on action.  Habits of thought can lead to habits of deed.

Take a look at Billboard’s Hot 100 music chart and see what’s been capturing people’s imagination lately.  What world do we want our children and grandchildren to fantasize about?  Which reality would we want them to live in, to make possible in their own lives? Regardless of which reality we prefer, our imagination lays out the blueprint for us to make actual the possible. If Powers is right (and I obviously think she’s onto something), then it reopens questions about whether, or at the very least to what extent, there really is “mindless” entertainment.  Since words do make worlds, proverbial and actual, it’s worth asking with some extra care which words we give permission to wander freely through the wilds of our imagination.