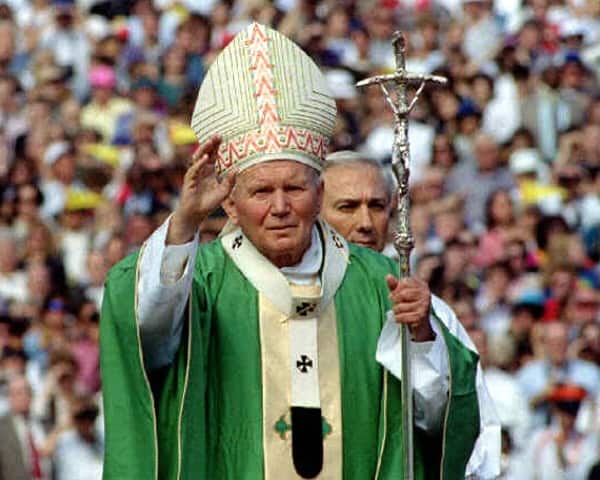 James Martin writes about the dual announcement at America Magazine:

Today’s announcement by Pope Francis of the canonization of Blessed John Paul II was not a surprise. From the time of his death in 2005, when crowds shouted “Santo Subito!” in St. Peter’s Square, to Pope Benedict XVI’s waiving of the normal five-year rule (the process of canonization normally doesn’t begin until five years after a person’s death) to this week’s leaked news that the second required miracle had been approved, the official announcement had been expected.

What was not expected in today’s announcement, which came during a meeting with the prefect of the Congregation for the Causes of Saints, was the approval of the canonization of Blessed John XXIII, whose process seemed to have languished in the past few years. Still more surprising was the news that the Pope had waived the standard second miracle. Federico Lombardi, SJ, the papal spokesperson, explained, “Despite the absence of a second miracle, it was the Pope’s will that the Sainthood of the great Pope of the Second Vatican Council be recognized.” Fr. Lombardi noted that of course the pope has the authority to “dispense” with that requirement, and also added that there had been discussions among theologians and experts about whether two miracles were needed for beatification and canonization. As ever, Pope Francis surprises. (Perhaps John XXIII’s second miracle was the election of Francis.)

The two popes appeal to a wide variety of Catholics…

Continue reading over at America.