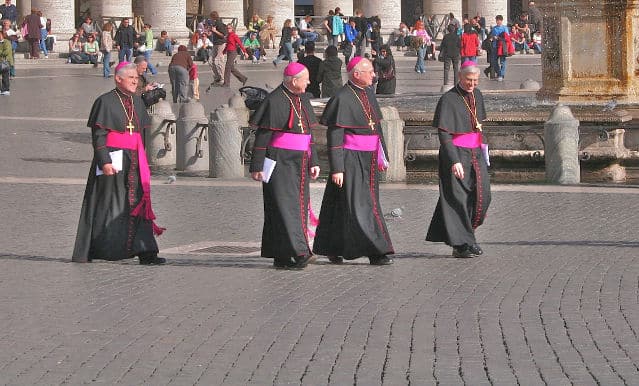 In January of 2012, an Italian television program aired, Gli Intoccabili, or, as it’s known in English, The Untouchables.  The program revealed to the world the mismanagement of the Roman Curia.  Here in Rome it was a sensation.  The night the program aired priests across the city were talking about the need to be at a TV come airtime the same way people talk about clearing their Sunday night schedules to watch the latest Game of Thrones. Later, personal and private Vatican documents — some of which were the personal letters of Pope Emeritus Benedict — were published.

The revelation of the power struggles and infighting that plagued the ancient institution didn’t stop there, however. Though the doors were locked and the meetings kept secret, we’ve learned that these same issues were discussed by the cardinals during the convocation prior to the election of Pope Francis. On Saturday the 13th or April, Pope Francis took on this task by creating a council, a group of eight Cardinals from around the world, to assist him in the long process of curial reform.

None of which, of course, explains what the Roman Curia is and what its reform means for us and for the Church.

Technically, the word curia simply means court, as in royal court. It can also be understood as the center of governance. For example, the Jesuit headquarter right outside Vatican City is called the Jesuit Curia. It’s where all the work and central governance for the Society takes place. The same goes for the Roman Curia. It’s there that all the offices and departments (technically called “dicastaries”) that support the Holy Father in his ministry of governing the Catholic church reside. In all honesty, that the Roman Curia has become a place of corruption and scandal is simply intolerable, centrally because a malfunctioning system cannot help Pope Francis pastor the Church. The need for reform is clear.

Reform itself is not new. In the 11th century Pope Gregory VII enacted a series of reforms which pulled the control of local bishops out of the hands of kings. In the 16th century, the Council of Trent worked to clear up the abuses within the Church as well as fine tune her theological thinking. The 20th century welcomed the Second Vatican Council which was to “let in fresh air” according to Pope John XXIII.

Neither is reform of the curia itself new. Catholic News Service’s Francis X. Rocca talks about clippings dating back to the 1950s regarding curial reform. Even Pope John Paul II attempted a reform of the curia and created a similar council of cardinals to assist him. This time, however, there appears to be something different: momentum. Some are even calling Pope Francis’ task of reform a mandate. To assist him, Francis has summoned 8 cardinals from around the world. These council members include:

One of the most striking things about this group of eight is that, except for Cardinal Bertello, none of them are part of the current curia. To use our American parlance, they are from outside the beltway. The hope is clear: that they’ll give a fresh perspective and an objective view to the goings on behind the Vatican walls. But this is not the only thing they will bring; each of the members of the new council have extensive experience of being leaders of local churches all over the world.  And at the same time each knows inner workings of church the Curia.  This balanced wealth of knowledge about how the system works (or, rather, doesn’t) from the outside gives hope there will be no need for a repeat performance of Gli Intoccabili.

Also, the geographic make-up is clearly noticeably. The council is equally distributed, and not heavily European as the College of Cardinals is. Vatican spokesperson, and Jesuit priest, Frederico Lombardi says that the ethnic and cultural diversity of the eight show that the pope wants a council “with a universal point of view and voices from different parts of the world.” This kind of effort to balance the Roman influence on the universal Church with the influence of the universal Church on Rome is being welcomed in many quarters.

But who are these men?  Can their backgrounds tell us anything about their possible efficacy?

Well, close to home is Cardinal Sean Patrick O’Malley from Boston, a man who is not new to reform. Being sent to Boston specifically with the task of cleaning up the tragedies left behind in the wake of the abuse scandals, Cardinal O’Malley, in the words of my Italian Jesuit friends, would have been the only cardinal from the United States many Italians would have welcomed as pope. In fact, as O’Malley prepared to begin his work in Boston he took words of St. Francis of Assisi to “Repair my Church” as a mantra. The similarity between he and Pope Francis’s attitudes are notable.

Another notable is Cardinal Laurent Monsengwo Pasinya of Congo. Cardinal Pasinya personally helped mediate the country’s political crisis during the formation of their new constitution. This is definitely someone I would want on my team if I were wanting to tackle the Roman Curia.

Cardinal Oscar Andrés Rodríguez Maradiaga of Honduras heads this council. This appointment is not surprising since the cardinal is head of Caritas International, an international organization that oversees all of the Church’s charities. Clearly Francis is again highlighting his concern for the poor.

The others are heads of churches, respected by their local flocks, formed by Catholic Social teaching, and experts in their fields of study.  They are reconcilers and passionate about the Church. (You can read the short bios that Catholic News Services has put together on each cardinal here).  They’ll meet as a group for the first time for three days in October, after which they will offer Pope Francis some recommendations.

But how will this group of eight affect us on the ground? To be honest, I’m not sure that it will. At our level, we’ll see the Church operating the same way it always does: people will go to Mass, priests will continue to give homilies (both good and bad), sins will still be forgiven in the confessional, couples will celebrate their love together in marriage, and on and on.

But that doesn’t mean that this council is meaningless.  For us this council, the mandate for reform on the part of the cardinals it embodies, and the actions of Pope Francis give us one thing: hope. Hope that the Church is still alive and still moving, still growing. For, in the words of Pope Francis regarding the Second Vatican Council, it is the Holy Spirit who “moves us, makes us walk, and pushes the Church forward.” Even on the ground level, the reform of the Roman Curia is a sign of the Holy Spirit at work.