For God and Country: A Prayer for the Fourth 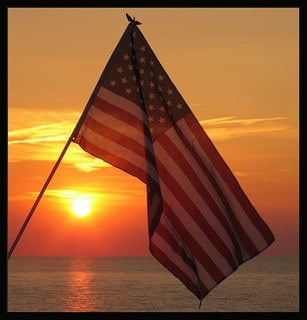 When John Carroll entered the Jesuit novitiate in 1753, he had no idea of the path that lay ahead of him. Shortly after he was ordained a Jesuit priest, the Society of Jesus was suppressed in 1773. Carroll then returned home to Maryland to work as a missionary, and later make an indelible mark on both church and state in the United States. He was the first bishop–and then the first archbishop–in the United States, and the founder of Georgetown University. Carroll was also an active force in the political life of the nascent American republic.

The following is an excerpt from Carroll’s “Prayer for Government,” which feels as appropriate today as when it was written in 1791. Please join us today in offering a prayer for the United States, its leaders, and all its people.

We pray Thee O God of might, wisdom, and justice! Through whom authority is rightly administered, laws are enacted, and judgment decreed, assist with Thy Holy Spirit of counsel and fortitude the President of these United States, that his administration may be conducted in righteousness, and be eminently useful to Thy people over whom he presides; by encouraging due respect for virtue and religion; by a faithful execution of the laws in justice and mercy; and by restraining vice and immorality. Let the light of Thy divine wisdom direct the deliberations of Congress, and shine forth in all the proceedings and laws framed for our rule and government, so that they may tend to the preservation of peace, the promotion of national happiness, the increase of industry, sobriety, and useful knowledge; and may perpetuate to us the blessing of equal liberty.

We pray for his excellency, the governor of this state, for the members of the assembly, for all judges, magistrates, and other officers who are appointed to guard our political welfare, that they may be enabled, by Thy powerful protection, to discharge the duties of their respective stations with honesty and ability.

We recommend likewise, to Thy unbounded mercy, all our brethren and fellow citizens throughout the United States, that they may be blessed in the knowledge and sanctified in the observance of Thy most holy law; that they may be preserved in union, and in that peace which the world cannot give; and after enjoying the blessings of this life, be admitted to those which are eternal.

The full text can be found here.