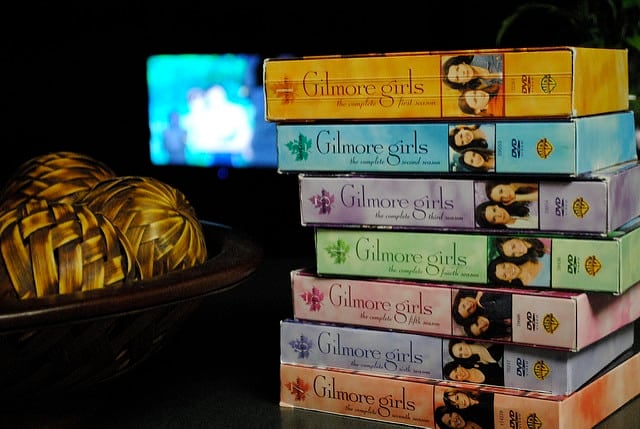 The most hopeful moment of November 2016 comes this Friday, when Netflix releases the long-anticipated Gilmore Girls new season.

This has literally been years in the making. Fans, disappointed by the ending of the popular television show in 2007, are excited to see favorite characters Lorelei Gilmore (Lauren Graham) and daughter Rory (Alexis Bledel) rapidly speak back and forth over a cup of coffee at the kitchen table.

Gilmore Girls was a nightly ritual for my Jesuit Volunteer Community in 2009. I’d come home from work, open the door, hear tears, and know instantly: my roommate was watching another episode. Together, we’d watch her DVD copies, nostalgic for a past we participated in during our middle and high school years. And now that all seasons are on Netflix, young people who might have been born when it premiered are just as hooked as we were.

In anticipation for the new season, pop-up “Luke’s Diners” appeared across the country in October. Last week, Vogue offered a list of the top 13 episodes to watch before the relaunch. And when the trailer was released by Netflix, Carole King’s “Where You Lead,” the show’s theme song, caused many fans to cry.

Gilmore Girls is one reboot among many in the last few years. Netflix also released a new season of Arrested Development in 2013. That same year, long time ABC soap operas All My Children and One Life to Live had albeit short relaunch. Currently, Golden Girls has an Off-Broadway revival – with puppets. And, maybe wanting to relive their childhood, fans await the release of the new Power Rangers movie.

And of course, Netflix produced the relaunch of Full House, or as they call it, Fuller House last year. Within days of its premier, Netflix confirmed a second season. While the data may be unreliable, some say Fuller House is Netflix’s most watched show.

What drives us to watch relaunches of old shows rather than new series like Unbreakable Kimmy Schmitt? What compels us towards nostalgic TV watching?

Nostalgia signifies longing for the past. We long for that time when things were better – even if they never were. This drives our political preferences, regardless of our political orientation. And according to journalist Peter Marks, when politics are too hard, nostalgia allows us to retreat out:

In an age of high anxiety — economic or political — we tend to reach into the cabinet of our comforts and scrounge for reminders of stabler periods. So now, it seems, is prime time for nostalgia.

He wrote that on November 5th – just three days before our presidential Election.

In these moments of uncertainty, commodified TV nostalgia is easier to digest than reality. We can watch old episodes that elicit that perfect moment of the past. We can also watch the relaunch and enter back into that story that swept our imaginations. There we might imagine ourselves part of a stabler community,a community of viewers who are in love just like us.

The tension with these communities of viewers is that they can numb us from action. Take the mother in the movie Joy who is stifled by her daily soap opera: she finds herself unable to change for years, and is addicted to the false sense of security offered in her show. Escaping into television, we too run the risk of becoming a less intense version of her.

But could nostalgia be offering us something, more than just an escape from national instability? Peter Marks seems to think so:

As much as nostalgia seems a regressive phenomenon — a retreat to the consolation of what makes us feel unchallengeably secure — the fact is that the things we long for tell us something about who we are today.

For many people, our country is in a moment of post-election national soul-searching. By returning to a place where we found love, connection, joy, and struggle, the Gilmore Girls revival [or other favorite show] might offers us one space for personal reflection.. And maybe then, finding some renewed hope in something meaningful from the past, we can move beyond simple escape.

The question for us is whether we find ourselves in a chronic retreat from reality or recharged for action and engagement. If we’re empowered rather than stinted by nostalgia, we can garner the strength needed to seize the infinite possibilities that are in front of us.